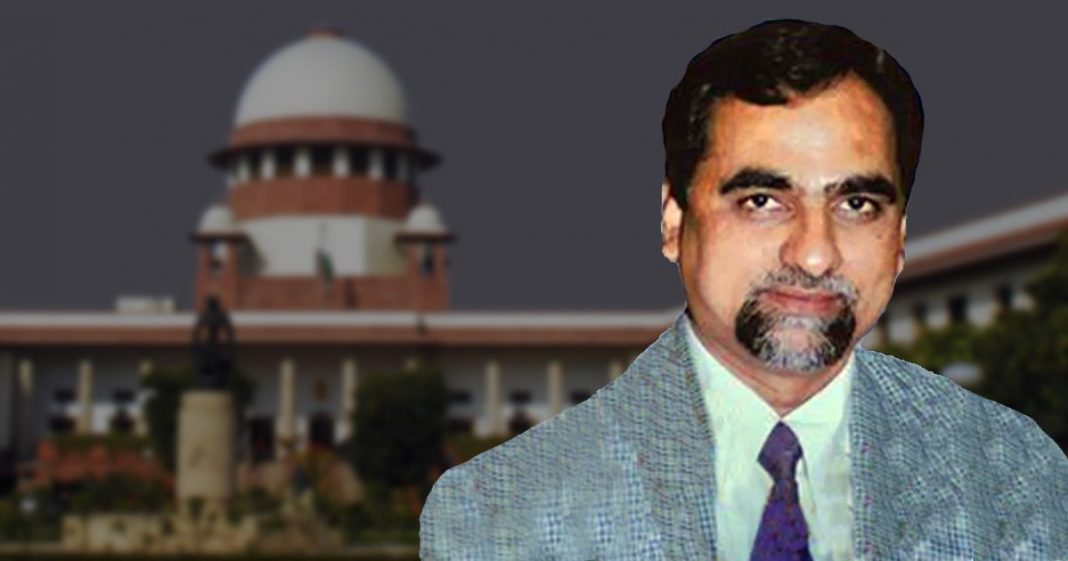 More than three years after the death of special CBI judge B.H.Loya, the Supreme Court, on Thursday, dismissed petitions seeking an independent probe into his death. Five petitions, including those filed by drawing-room activist and Congress politician Tehseen Poonawala and journalist BS Lone, were moved in the Supreme Court seeking an independent probe into the alleged mysterious death of Judge Loya, who was handling a murder case in which BJP chief Amit Shah was among the accused, when he died of a heart attack in December 2014.

The top court ruled that the death was due to “natural causes” and that the petitioners had tried to scandalise the judiciary. The three-judge bench, headed by Chief Justice of India Deepak Misra and comprising Justices A.M. Khanwilkar and D.Y. Chandrachud, pronounced its verdict after hearing a clutch of petitions. The bench further said that the petition was a “veiled attempt to launch a frontal attack on the independence of judiciary” and that the petitioners’ conduct, prima-facie, constitutes criminal contempt. However, the bench spared them of any contempt action.

Records show that Judge Loya died of a cardiac arrest on December 1, 2014, in Nagpur, where he had gone to attend the wedding of a colleague’s daughter. BJP chief Amit Shah and others were named in the Sohrabuddin case and later discharged. The petitioners, however, had moved the top court alleging he died under “mysterious” circumstances. The issue came under the spotlight in November last year after media reports quoted his sister as raising suspicion about the circumstances surrounding it and linking it to the Sohrabuddin case. But Loya’s son in January this year said his father died of natural causes.

The Supreme Court, in its judgment, said there were increasing instances of PILs being misused and referred to the present petitions as a case in point. It added that courts should not be a venue to settle political scores. It noted that even the two judges of the SC bench which heard the petitions were not spared by the petitioners and said the petitions were a “misuse of the judicial process”.

“PIL jurisdiction is being brazenly used by those who have an agenda to settle scores. The true face of the petition is seldom unravelled. It’s a serious concern as frivolous PILs detract court’s time from hearing genuine petitions of personal liberty,” the judges said, adding that, “there is no reason to doubt the consistent statements by judges who accompanied Judge Loya to Nagpur.”

The Supreme Court also condemned the petitioners for referring to cases not related to the Judge Loya case, and said “unfounded aspersions” were cast on high court judges and insinuations were made that one individual was controlling the judiciary. It came down heavily on the alleged accusations, bullying and browbeating of judges in the top court by some activist lawyers and said the judiciary and judicial officers need to be saved from such averments.

The court’s order makes it clear that disguised and deceitful attempts to mislead the country have turned into a relentless campaign in the last few years. It would have been better if the CJI-bench had gone beyond expressing its concerns and ordered some sort of punishment so as to deter those running PIL shops and stop them in their tracks. It must be remembered that in recent times, a group of people has arisen whose only logic for survival is filing of PILs on frivolous issues in the Supreme Court and wasting its time, and along with it, that of the country.

The same thing happened in the case of Loya’s death when, nearly three years earlier, a campaign was launched which insinuated that his death was not natural. Neither was he provided a proper treatment nor was his dead body carried in a proper manner. This edifice of falsehood was raised further and further and for this, the judges with Loya at the time of his cardiac arrest and the doctor who treated him were all tarred as being part of a fanciful conspiracy. This was easy because, as mentioned earlier, the judge’s sister termed his death as suspicious though his son made it clear in January this year that it was an emotional outburst and his father died of natural causes. But the habitual PIL filers were undeterred. They not only marginalised the son but also rejected Maharashtra police’s probe into the matter. They beat down the Supreme Court’s doors and created a false narrative so as to browbeat the apex court into issuing orders desired by some lawyers and out-of-work politicians.

These TV studio activists were hell-bent on playing the roles of accusers, lawyers and the judges. It is not surprising that when the judgement, contrary to their wish, was pronounced; it was a black day for them. But what was really astonishing was the reaction of some political parties. Of these, the stance of Congress was bizarre. Till recent past, its leaders did not tire of saying that they do not comment on legal matters but now, they are doing exactly the same thing. It is apparent now that the party is indulging in politics in the garb of mischievous petitions. Whatever it may be, the Supreme Court must step in and prevent the misuse of the PILs.