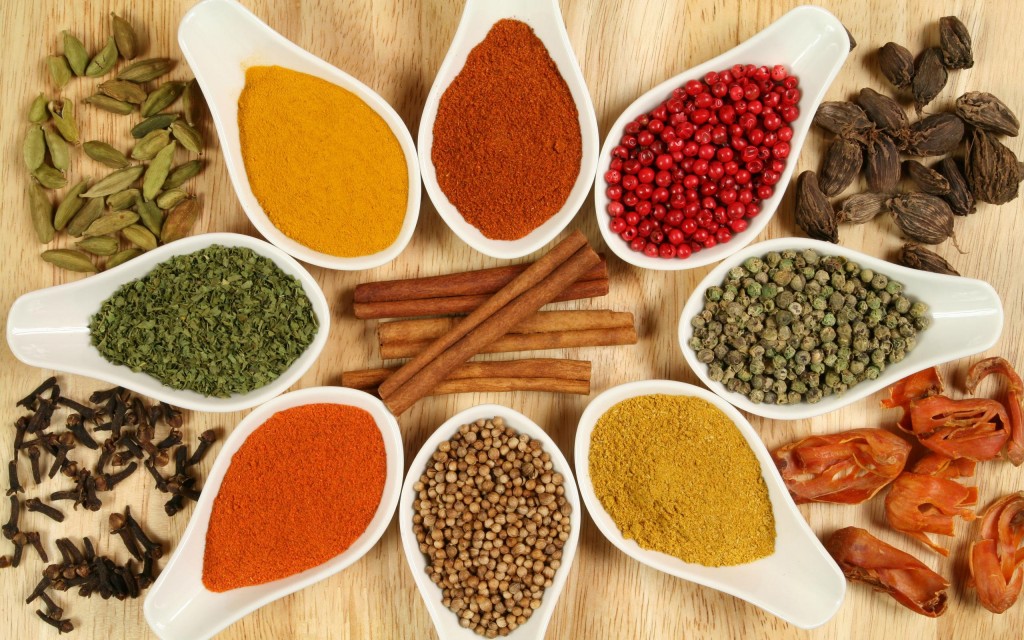 SPICE UP YOUR LIFE

Spices that are used in Indian cooking makes Indian food appealing to the world. Spices extensively used in Indian kitchen is not to make the food fiery hot but to make the dish distinctive, flavourful and wonderfully aromatic. Spices may be technically called heart of Indian cuisine and Indian kitchen. Each spice gives its unique flavour and taste to the food and when different spices are combined together, the permutation creates wonders with taste and flavour. Apart from food, spices are also traditionally used in Ayurveda for its medicinal properties and health benefits. Hence spices not only render taste but also health. Must have heard of “Dadima ke nuskhe” which are the traditional household treatments for simple ailments; and in these treatments spices finds an important place.

Let’s get to know a few popular Indian Spices and their health benefits:

Turmeric has been used in Indian household from time immemorial not only in cooking but also for its medicinal properties. The spice that gives the traditional Indian curries its yellow colour has lots of important role to play in our health just than improving the appeal of the food. Turmeric has a compound, called curcuminoids or most importantly curcumin which is the main active ingredient in turmeric and gives it the healing properties.

So when in pain have turmeric milk, though taste weird but it miraculously treats you.

One of the most delicious and healthiest spices on the planet. It can lower blood sugar level and reduce heart disease risk factors. Distinct smell and flavour of cinnamon is due to the oily part comprising a compound called cinnamaldehyde which has powerful effect on health and metabolism. The antioxidant activity of cinnamon can even out rank super foods like garlic and oregano.

Next time you have a toast in breakfast or brew yourself a coffee, sprinkle some cinnamon powder to it.

Suffering From Celiac Disease? Here Are Top 10 Gluten Free Foods To Fight It

It may be used as whole seeds or as powder. Add some to your dough for making paranthas or puris or chew on some roasted caraway seeds after meal to enhance digestion and prevent flatulence.

It is a common practice particularly in Indian sub continent to chew fennel seeds after meal to facilitate digestion and also to prevent bad breath. It stimulates secretion of digestive juices and facilitates proper absorption of nutrients from the food. Fennel is good source of fiber, potassium, Vit C, Vit B and phytonutrients, coupled with lack of cholesterol, all supporting heart health. Health benefits include relief from anaemia, indigestion, flatulence, constipation, colic, diarrhoea, respiratory disorder, menstrual disorder and even in eye care.

It is most common spice used in Indian curries as whole seeds or as powder in curries. Its ability to aid in digestion, improve immunity and treat piles, insomnia, respiratory diseases, asthma, bronchitis, common cold, lactation, anaemia, skin disorders, boils and cancer. Many of you might remember having hated those curries and soups which had roasted or fried cumin or those who are of the opinion that spices are bad for one’s health should note that cumin can be beneficial for some of the most dangerous diseases and is generally considered a boost for overall health.

Cardamom is the spice that originated in India, primarily in humid climate of Western Ghats. There are two main types available in India, green cardamom and black cardamom. It is considered as the queen of Spices and is one of the costliest spices ranking third after saffron and vanilla. It is found in the form of small pod with tiny black seeds inside. Both the seeds and the pod give a pleasant aroma and flavour. In Indian cooking, cardamom is not just used in hot spicy dishes but also in desserts and beverages to compliment the sweetness. Cardamom tea is a much favoured beverage all over India. Apart from imparting flavor in Indian dishes, cardamom is also one of the important herbs in Ayurveda. It is believed to be a remedy for teeth and gum infection, throat infections, congestion of the lungs and pulmonary tuberculosis, inflammation of the eyelids, digestive problems, renal failure and gall stones and also used as an antidote for poisons and venoms in Chinese medicine.

So now you know why cardamom tea may actually prove healthful.

Also Read: Top 12 Healthy Foods For Your Overall Well Being

These tiny black seeds are important in Indian cooking, traditionally being used as seasoning of curries or as a spice mix in pickles. Its hot tanginess imparts unique flavour and taste to the dish in addition to contributing to the various health benefits of spices. These tiny seeds have got the cure for almost every disease owing to over hundred chemical constituents that are found in it, the essential fatty acids are the abundant of all. The health benefits are numerous and are listed below.

To incorporate black cumin in your daily diet, you may put in some seeds while brewing your tea or simply sprinkling some powder over the salad or simply having it with honey may do wonders.

The smelly powder is a common taste enhancer and is used in seasoning of daals, sambhar, curries, and various other recipes of Indian cuisine. The smell is the only fault of this highly beneficial spice which has numerous health benefits.

Afterall Spicy is not that bad you see.

How To Get Health Insurance In Western Countries?

Should You Buy More Than One Medical Insurance Plans?

Food E-Commerce: How The World Of Catering Has Been Renewed

Top 10 Best Fitness Gadgets That You Must Use To Make Your Workouts Better..