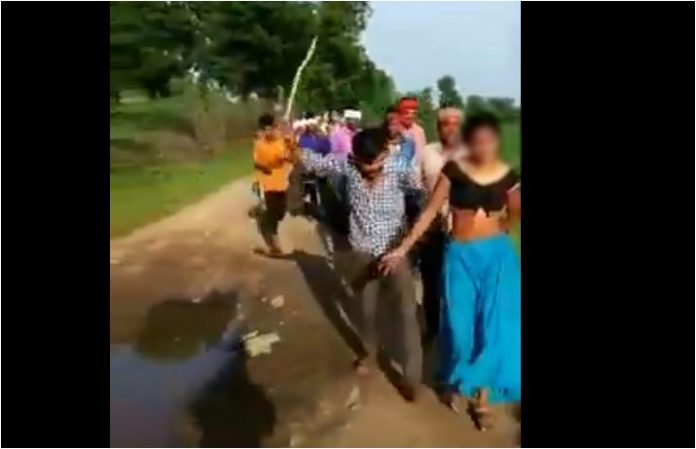 She wept, She cried and flinched in pain, all the while begging for mercy from stick wielding males, but nothing stopped them from brutally imparting mob justice to a teen, 19 yrs, with sticks, stripping her while parading her half-naked across villages.

Some of these men were from her own family and she was being punished for? Her crime was that she innocently had fallen in love and eloped with a man from a different caste.

An utterly shocking and disturbing video of this incident that occurred in the Indian state of Madhya Pradesh’s Alirajpur district on September 1, went viral on Twitter.

India of the 21st century, is replete with mobs taking law in their hands, lynching for alleged crimes and resorting to violence at the drop of a hat. Twitter users mostly expressed disgust and demanded that the culprits be hanged for the inhuman treatment of a young girl.

Filmmaker Vinod Kapri shared the video by Indian journalist Makarand Kale on Tuesday. The tweet from Kapri is as below:

The video, shot on a smart phone, shows the girl being flogged with sticks endlessly as she keeps on walking fast on an endless road in a bid to save herself from the men thrashing her. They are also seen trying to strip her of her clothes as she is paraded half-naked. None worth a man from amongst the stream of passers by or those witnessing intervened, as though it was a daily routine for them.

As usual once the video started getting shared across the social media, it spurred the police into action, which in its investigation found that the victim was a 19 year old Bhilala tribal girl and was being punished by male members and relatives as she tried to elope with a Bheel guy.

A reporter from news18 channel reported that the Jobat Sub Divisional Officer of Police, R C Bhakar confirmed that the police started an investigation after the video had come to their notice. The incident was reported from Temachi village, but nobody on the girls behalf or she herself filed any complaint so far, the police officer said.

The victim and her father were not in the village so their statements could not be recorded, he said.

Details of the incident could be ascertained only after recording their statements, Bhakar added. Her other family members, who too were out of the village, were being contacted, he said.

Some twitteratis in agitation sarcastically blamed the govt for the oft reported mob justice and mob lynchings that have taken place in India in a similar fashion at the hands of fearless crowds in broad daylight. Tweeps tagged politicians to highlight the plight of the girl.

Incidentally the state happens to be under the Congress rule, which has been at the fore front in its fight against such crimes and injustices and has often blamed the BJP govt for promoting such heinous acts of violence.

@atulkasbekar a twitterati tweeted in anger, “There’s ample video proof I don’t know when and where this is, but surely one doesn’t need much more evidence to lock those scum up and throw away the key!?

Someone else who goes by RJ @demonyar blamed it all on the leadership saying: Idle minds is devils paradise. Shameful for those leaders who can’t bring justice to such acts and stop further similar moves.

Even others like @suhailamd27 simply demanded: please abolish this caste system and make every one equal…other wise these incidents will continue