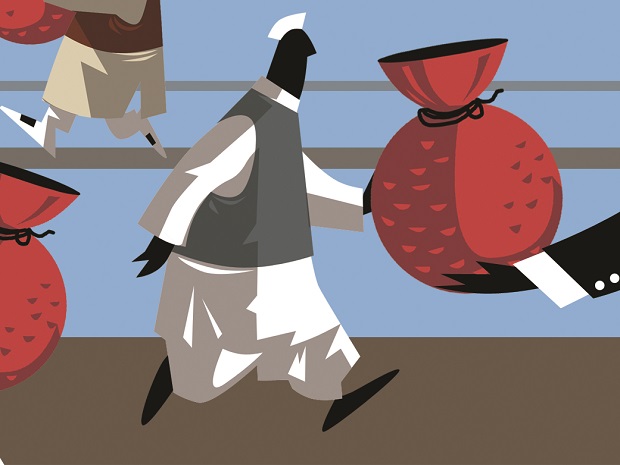 Despite public furore in the aftermath of the November 8 Note-ban over anonymous donations to political parties and PM Narendra Modi’s assurance on the issue, nothing concrete has been done to bring in transparency or curb rampant use of black money in political funding. On the contrary, the BJP govt has been accused of deliberately
amending rules so as to remove the limits on political donations by companies and in the process legalise huge anonymous donations. Even most of the other political parties across the board, with a few exceptions, have maintained a steady silence over the issue of transparency in political funding.

The Supreme Court today sought the responses of the government and the Election Commission of India (ECI) on a PIL challenging the recent changes in laws on funding of political parties and alleging that these “legitimise electoral corruption”.

A bench comprising Chief Justice Dipak Misra and Justices A M Khanwilkar and D Y Chandrachud issued notice to the Centre and the poll panel on the plea, which also alleged that the changes would bring opacity into Indian politics and open the doors “to unlimited political donations”.

Through the petition, an NGO has challenged the amendments made to the Reserve Bank of India Act, the Representation of the People (RP) Act, the Income Tax Act, the Companies Act and the Foreign Contribution Regulation Act (FCRA) by the Finance Acts of 2016 and 2017.

The NGO, Association for Democratic Reforms (ADR), has claimed in its plea that the amendments have removed the cap on political donations by companies and legalised anonymous donations by introducing the use of electoral bonds which can be issued by any scheduled bank for the purpose of funding any party.

Also Read: It Pays to Invest in Female led Companies

It said that by amending the RP Act, the donations made by way of electoral bonds are exempted from disclosure to the ECI and claimed that this would “adversely affect electoral transparency and encourage corrupt practices in politics”.

The PIL contended that the amendment to the Companies Act has not only removed the earlier cap of 7.5 per cent of a company’s average three-year net profit for political donations, but a corporate entity now is no longer required to name the parties to which they make contributions.

“The companies are no longer required to disclose the break-up of contributions made to different political parties.

“Further, it opens up the possibility of companies being brought into existence by unscrupulous elements primarily for routing funds to political parties through anonymous and opaque instruments like electoral bonds,” the petition has claimed.

ADR, represented by advocate Prashant Bhushan, has also said that by amending the FCRA, foreign companies with Indian subsidiaries have been allowed to fund political parties.

It has contended that this would expose Indian politics and democracy to international lobbyists who may want to further their agenda.

Apart from challenging the amendments, the petition has also opposed the method by which the amendments were carried out as money bills through the two Finance Acts.

The NGO has alleged that the Finance Acts have been enacted as money bills to bypass the Rajya Sabha.

It has contended that these legislations were not money bills as they provided for matters which were in addition to those enumerated in Article 110(1) of the Constitution and therefore, they were bills which had to be routed through the Rajya Sabha.

Article 110(1) lays down the constituents of a money bill, the NGO said and alleged that the passage of the two Finance Acts was a “clear case of constitutional fraud violating the fundamental rights and a colourable exercise of power”.

The petition has sought that the amendments made to the various laws be declared as “unconstitutional, illegal and void” and their operation be put on hold till the PIL is finally decided.