Home India The Dark Ages – Woman Murdered For Property After Branding Her A... 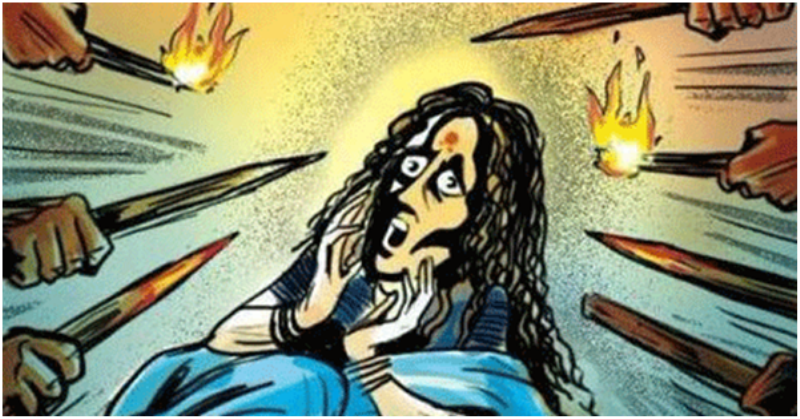 More often than not, non visionary leaders have driven societies and nations to doom. In the past few decades, India’s progress in scientific learning and the strides in IT and Technology had started to being appreciated the world over.  At an accelerated pace, India was fast coming out from the shadows of being referred to as the land of snake charmers.

However, the recent state patronized fillip to the gangs of gau-rakshaks, anti-romeo squads, love-jihad activists and the likes have literally managed to put brakes on the momentum gained in the direction of nations progress and prosperity.

Little did the leaders and those at the helm of affairs realize that state patronage in one form or the other to the above mentioned behemoths taking justice in their own hands will eventually get out of control. The result is the spill over onto the streets across India, of blood thirsty mobs and lynch gangs that are audacious enough to even seek official blanket covers by the administrators to enter houses to sniff out beef and impart quick justice in their own sweet way which is often an act of public prosecution through mob lynching.

The trend as was expected by saner minds has spilled over from imparting social justice to settling personal scores not only outside on the streets but within families and own relations. The human jealousy and the animal beast within finds no limit when it comes to furthering nefarious designs.

Numerous such cases have come to light while a huge number of them go unreported or even unnoticed.

In a recent case, 5 persons were arrested in Rajasthan’s Ajmer district on Sunday for torturing and murdering a woman relative earlier this month after branding her a witch, police said.

“We have arrested Mahaveer, Gopi Chand, Chandra Prakash, Pinki and Sonya in this case. These arrests have been made under various sections of the Indian Penal Code including Section 302 (punishment for murder) and the Rajasthan Prevention of Witch-Hunting Act,” said a police official on phone from Kekri in Ajmer.

Kalu and Maya, the son and daughter of 40-year-old Kanya, in a complaint to police, alleged that their mother was ill for some time after her husband’s death about a month ago and some relatives allegedly to grab her property branded her as a witch.

The woman was beaten up badly with iron chains, dragged forcibly by hair and paraded naked in the village. Iron rods were also put into her eyes and she was also forced to eat faeces.

The woman subsequently died and was cremated clandestinely on August 4, according to the complaint.

Even the village panchayat, also sought to cover up the incident, directing them to go to Pushkar and take a holy dip to wash their sins and also warning that anyone who disclosed the incident to the authorities would be cast out from the community.