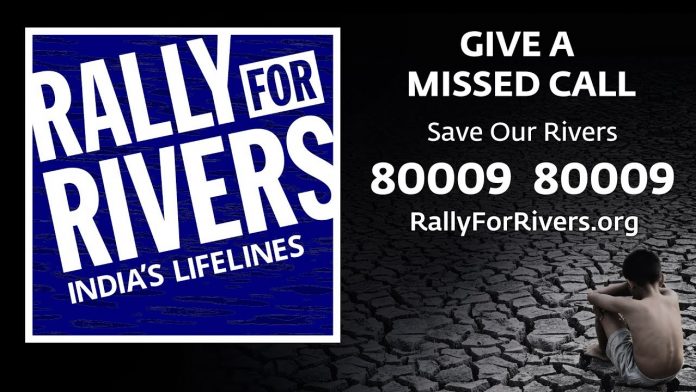 This is not a protest. This is not an agitation. This is a campaign to raise awareness that our rivers are depleting. Everyone who consumes water must Rally For Rivers – Sadhguru

Rivers are the lifelines that have nurtured the mankind from time immemorial. Hence, In India, they are not considered only as geographical entities, but life-giving Gods and Goddesses. India is blessed with 14 major, 55 minor, and several small rivers; hence it is also called ‘Land of Rivers’.  However, the condition of our rivers is in dismal state.

The perennial rivers have become seasonal; some smaller rivers
already vanished; and the remaining rivers are severely polluted.

According to Hindu Mythology, taking holy dip in river Ganga is considered sacred especially on new moon day and full moon day.  Ganga’s water or better known as Ganga Jal is considered no less than ‘amrit’ (nectar of the gods). The literal meaning of the word ‘Ganga’ is ‘to flow’. Unfortunately, according to WWF, Ganga is one of the most endangered rivers in the world. The aftereffects of the same are horrifying for the generations to come as 70% of our body is water, and the very source of the water is in danger.

The situation is alarming and Rally for rivers is a message that India is a matured democracy and its responsible citizens are ready to back the government for long-term policies. Time is ripe for a law on mistreat and misuse of our reverent rivers.

Rally for Rivers is an expression of our responsibility for future generations.

Let’s drive towards a robust river rejuvenation policy. It’s time to make a change before it’s too late. Our rivers have sustained us and now it’s our turn to revitalize our dying rivers. The least one can do is to plant one tree this year and nourish the same for coming two years.

Let us all support the noble cause ‘Rally for Rivers’ by giving a missed call to 8000980009. It is not a question of whether we can do it or not. Do we want to do it or not? – is the only question. Let’s join Sadhguru in this journey and make it happen.