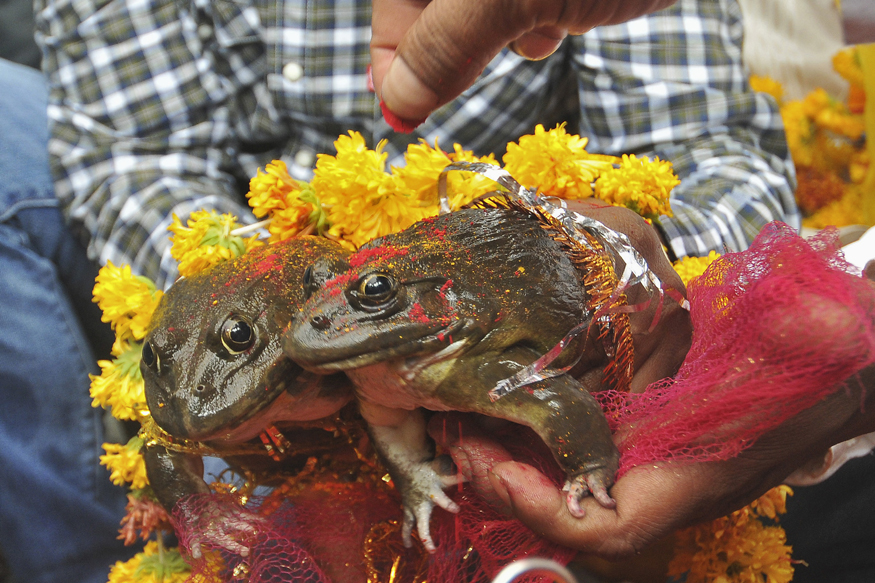 You might have ridiculed Justice Mahesh Chandra Sharma for having said, “Peacock is a Bramhachari and it does not have sex with a peahen. The peahen gets pregnant drinking the tears of the peacock. Even Lord Krishna carried the feather of a peacock on his head.”

However here is another pearl of wisdom and its none else this time, than a sitting Minister of State of MP from the Bhartiya Janata Party (BJP).  Madhya Pradesh minister of state for woman and child development Lalita Yadav allegedly organised a wedding of two frogs at a temple in Chhattarpur to appease rain gods, drawing criticism from the Opposition.

Hundreds of people gathered at the temple premises to see the unique wedding, which was followed by a feast.

According to Hindustan Times, temple priest Acharya Brijnandan said, “The frogs’ marriage and feast is a very old tradition to please gods.” He is among those who believe that there will be good monsoon this year due to the ceremony.

However, the Opposition was not pleased and alleged that the minister’s act would encourage superstition.

On several earlier occasions, the Indian National Congress and many of the political parties across India have charged the Bhartiya Janata Party of encouraging regressive practices instead of promoting Scientific thought and practices.

The minister on her part defended her stance, saying the marriage was a “logical tradition which was necessary to balance the environment”.

Yadav represents Chhattarpur constituency, which falls in the Bundelkhand region that has been in the grip of a severe drought for the past two years.

In a similar incident, locals in Uttar Pradesh’s Varanasi married off two plastic frogs to pray for monsoon. Two people dressed as bride and groom reportedly carried the frogs on decorated plates during the ritual.