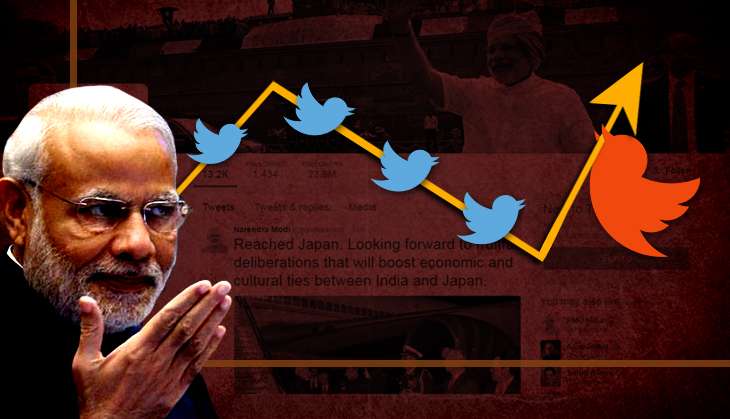 Since the time PM Narendra Modi announced the junking of the 500 and 1000 currency notes, many of his own followers who possibly are facing huge difficulties across India seem to have deserted him. A person typically un-follows another twitterati when he / she doesnt want to hear or talk about that person or simply doesn’t like his / her face and so to avoid being reminded of, generally un-follows that person.

Probably the measure announced by Prime Minister Narendra Modi on 8th Nov 2016 was not liked by many of Modi’s supporters, often referred to as Bhakts in Twitter parlance. This resulted in Modi’s Twitter followers dipping by over 3 lakh after he announced withdrawal of old 500 and 1000 rupee notes.

According to statistics on Twitter Counter, Modi (@narendramodi), one of the most popular politicians on Twitter, had 24,120,043 followers on November 8, the day when he announced that Rs 500 and Rs 1000 notes will cease to be legal.

The number of followers decreased by 313,312 the following day (November 09), reducing his followers to 23,806,731, as per data available on Twitter analytics platform Twitter Counter.

However, next day (November 10), his Twitter handle added 4,30,128 followers to take the follower base to 24,236,859. The additions take place in many forms. Some of these are automated followings which often drop with time and are many a times fakes known as bots or Egg heads.

Prime Minister Narendra Modi is the most followed Indian on Twitter. In August, he had pipped Bollywood megastar Amitabh Bachchan to take the numero uno position.

The number of followers of Modi’s account (@narendramodi) consistently increased by about a million every two months in 2015.

It crossed the 15 million mark on September 22 last year, and touched 16 million on November 20. In 2016, the growth rate of Modi’s Twitter followers slowed down, with about 5 million users being added in around eight months.

Active on Twitter since 2009, Modi is also the second most followed politician in the world, right after Barack Obama (@barackobama), as per Twitter.

Modi, who had used social media platforms like Twitter and Facebook extensively for his election campaigns, has continued to leverage the micro blogging platform for reaching out to the public. However of late, the rival parties like the Congress and its Vice President Rahul Gandhi ( @OfficeofRG) who all lacked in SM reach in 2014 have learned fast and to an extent now match the strength and flexing of Modi’s party BJP.

Mr Modi has actively used Twitter for campaigns like #MakeInIndia, #SwachBharat, #MannKiBaat and #SelfieWithDaughter and has been encouraging citizens and Government officials to use social media to connect.

Check Out How Celebrities and Influencers Celebrating Diwali This Year