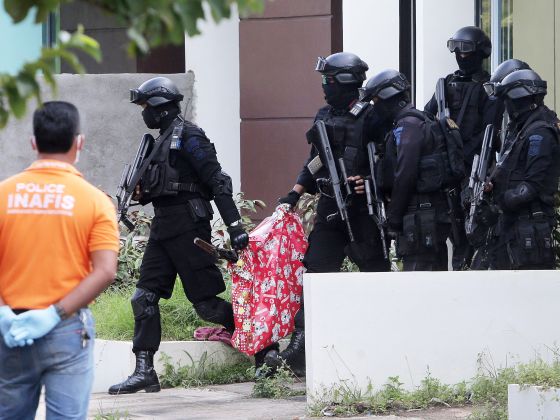 Aged between 19 and 46, the suspects are purportedly part of a terror cell called KGR@Katibah GR, which is said to have links to Bahrun Naim, the alleged mastermind behind the shopping mall bomb attack in central Jakarta earlier this year.

No details of the foiled plot were available, but Indonesia’s Densus 88 reportedly seized a weapons stash at a housing complex during a three-and-a-half hour swoop on the suspects across various parts of Batam.

Responding to queries after news of the arrests broke, a Ministry of Home Affairs spokesperson said it was aware of the attack plans and had been coordinating closely with the Indonesian authorities to monitor the group’s activities and nab those involved, without specifying the timeline.

The police and other agencies have been stepping up inland and border security measures, in response to this threat and the “prevailing security situation”, she added.

The spokesperson also said this development “highlights the seriousness of the terrorist threat to Singapore” and advised the public to remain vigilant.

According to a statement from Indonesia’s national police, the group was allegedly led by Gigih Rahmat Dewa, 31. The others arrested were Trio Syafrido, 46; Eka Saputra, 35; Tarmidzi, 21; Hadi Gusti Yanda, 20; and Muhammad Tegar Sucianto, 19. All of them worked at electronics factories in Batam, except Trio, who is reportedly a bank executive.

Gigih, the group’s ring leader, is said to have aided militants travelling from Indonesia to Syria, via Turkey. The Indonesian police have also linked him to Bahrun, adding that Gigih “is suspected of receiving and channeling funds for radical activities sourced from Bahrun Naim”.

Bahrun, an Indonesian militant who has been linked to the Islamic State in Iraq and Syria, is on the radar of security agencies. In March this year, Law and Home Affairs Minister had said Bahrun is said to have encouraged attacks in Singapore.

The Jakarta Post reported that the Indonesian police received a letter on July 1 informing them of a group on the Batam and Bintan islands planning an attack.

Riau Islands police chief Brigadier General Sambudi Gusdian was quoted as saying the arrests were “purely the result of an investigation by Densus 88, not the result of Singapore’s assistance”.

Responding to media queries, Mr Shanmugam, who has warned on several occasions that the threat of a terror attack in Singapore was at its highest level in recent times, said the alleged rocket attack plot by the group did not come as a surprise.

“I have spoken several times, about plans being made in places just outside Singapore, to target Singapore — we were serious about the threats. The attacks can come from terrorists who seek to come into Singapore; and they can come from terrorists who locate themselves just outside Singapore. Our small size increases these risks,” he said. “Our people have to be extra alert. We have to emphasise the importance of SGSecure, and the role that everyone has to play.”

Mr Shanmugam also thanked the Indonesian authorities’ move to arrest the suspects, adding that this showed the importance of co-operation between countries.

In a Facebook post, Deputy Prime Minister Teo Chee Hean, who is also Coordinating Minister for National Security, said the arrests showed the “seriousness of the threat we face”. “The development highlights the seriousness of the terrorism threat to Singapore, and the importance of the SG Secure national movement. All of us must remain vigilant,” he added.

Defence Minister Ng Eng Hen also weighed in, writing on Facebook: “Despite their arrests, this most recent plot shows how important our efforts are and why we must continue to protect our island. We should assume that there may be more plots, other terror cells on the lookout for ways, and new munitions to penetrate our defences. Terrorism is a global problem and no country is immune.”

He added: “We have to stay vigilant and keep improving our defence systems. Most importantly, we must remain united to protect what we treasure on this island home.”

Minister in the Prime Minister’s Office Chan Chun Sing also said “we can never take our security for granted”.

“Our security agencies and the Indonesian counterparts have done well to foil this plot. But we must always remember that we have to get it right, first time every time, all the time; while the attackers only need to get it right one time, anytime. Our safeguard is eternal vigilance by our security agencies and every Singaporean,” wrote Mr Chan on his Facebook page. “Even should they ever succeed in their plot, we must never let them destroy our unity or deprive us of our normalcy.”

Associate Professor Alan Chong from Nanyang Technological University’s S Rajaratnam School of International Studies (RSIS) it suggested that the terror suspects had thought about a military strategy involving missile technology, unlike the “low-tech attacks” carried out by suicide bombers for instance.

RSIS Head of Policy Studies and Coordinator of the National Studies Programme Kumar Ramakrishna said such tactics have raised questions of where the terror suspects obtained their weaponry and if they possessed the means to hit Singapore from that distance.

Singapore and Batam are less than 30km apart at the nearest point, but neither the Singapore nor the Indonesian authorities have given clues as to what type of rocket the suspects had tried to use, or if the Indonesian police managed to recover the weapon.

Dr Rohan Gunaratna, who heads the International Centre for Political Violence and Terrorism Research at RSIS, said that Batam was a convenient location for terrorists to target Singapore, given its proximity to the island. As a tourist location, Batam is also a “safe haven” for them as people can travel in and out of the place with relative ease, he added.

Batam and the Riau Islands have been linked to terrorist activities, according to security experts. In the 1950s and ’60s, the Riau Islands — which today also include Bintan and Karimun — were used by elements of the Communist Party of Malaya to infiltrate into Singapore.

In late-2001, Jemaah Islamiyah explored the possibility of smuggling explosive materials into Singapore from Batam.

And last November, it was reported that two Indonesian men planning to travel to Syria were denied entry into Singapore at the HarbourFront Ferry Terminal and sent back to Batam.