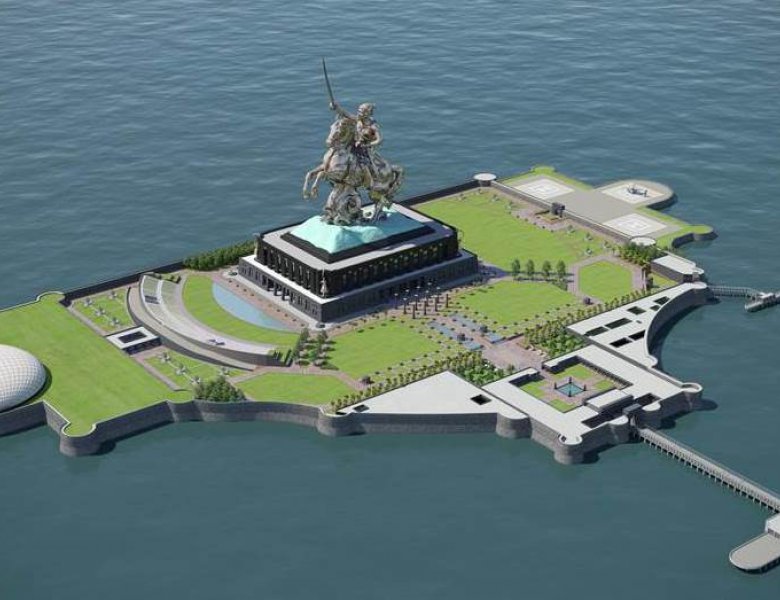 The tussle for taking credit in the one upmanship game of politics between the two main rivals, the Congress – NCP combine on one hand and BJP – Shiv Sena on the other entered a new phase on Saturday as Prime Minister Narendra Modi laid the foundation stone of Chhatrapati Shivaji memorial at Mumbai. The laying of foundation stone gives BJP the perfect opportunity to placate and pacify the Maratha community, currently agitating for reservations.

A strong clash of interests and opinions on the ground spilled over to the Social Media platforms and raged on without signs of abating. With the 192-metre structure construction kicking off the coast, BJP’s intent of scoring on multiple fronts like pleasing its ally Shiv Sena and bursting the balloon of Congress NCP combine, which had initially mooted the project in 2005, came in with stiff opposition ensuing.

Many think tanks, media and online intellectuals jumped into the fray to counter and nullify the brownie points that BJP expected to steal from its rival party. The Congress NCP combine that are led by Maratha feudal lords who understand the tokenism and emotion of politics, can’t let the BJP eat the pie so easily for a 11-year-old idea that they had come up with.

With many not concerned about politics too joining the fray, the project came in for severe criticism due to the humongous cost associated with it i.e. an exorbitant sum of Rs 3600 crores. In other words INR 3600,00,000,000 so as to highlight the actual amount.

Most of India discussed and deliberated on the issue, sometimes revolving around the cost and sometimes around the infinite alternate possibilities that sprang up overnight, of utilizing the money more productively and effectively instead of playing the political planks. While some said that India being a poor country could have utilized the money to provide better health care facilities for Maharashtrians, toilets for the city and safer roads. Some even suggesting of patriotically utilizing the money to fight terrorists and Pakistan.

Build world class community hospitals and schools in name of Shivaji in rural Maharashtra. That would be great way to honour his legacy.

Another Organization opposed the huge costs via their tweet:

These Figures Show How Budget For Shivaji Statue Is Far More Than Mumbai’s Welfare Schemes https://t.co/QFp6O5Z6jz

While all this raged on the social media turf, India’s ‘historical learnings’ stood as mute spectator, completely cold shouldered by the events. We all must have read about the great Mughals and the kingdoms and the golden era that once thrived across Hindustan. However the question that bother everyone often, amongst all the hullabaloo, “What was the real reason why all such ‘Golden Era’ and ‘Soney ki Chiriya’

sayings ended up with our slavery of the Britishers.” We have read enough about the East India Co, the infightings amongst princely states and bla bla, all reasons that no doubt stand true, but, only partially.

Thinking objectively, though History bears testimony, I feel that while the Mughals were busy building Palaces and Forts and Memorials like Taj Mahal and enjoying Mujras (not
that enjoying is taboo) in Raj Durbars, Somewhere in other part of the world (like Europe, US & erstwhile USSR) there were revolutions going on, R&D’s, people and regimes working hard, building educational institutions, testing guns and armaments and so on. The result, just like water flows and levels out all amounts of unevenness, hard working nations and regions flourished with all pervasiveness, wiping out those that were complacent, with the swords being no match to the technologically advanced guns in those times. (Wish Rani Laxmibai could have fought with guns instead of a sword)

In the same context, how we wish, our rulers, several several generations back, immaterial whether hindus or muslims or mughals, had been wise enough and kept pace with the world.

Instead of exhausting all resources into building Forts and memorials, if only they had spent on education, research and development, then probably today India would not have spent a whopping amount of Rs 59,000 Crores signing and importing Rafales from Dassault, France, but instead the situation would have been vice versa. Rs 59,000 crores flowing into India by virtue of exporting Defense Equipments to the outside world or due to indigenisation. But Alas all that remains a piped dream.

Infact, IF we as Indians and as a nation ignore HISTORY and keep squabbling amongst ourselves internally and abandon focus and competition with those advanced and developed countries of the world then sooner than later, we all are bound to meet the same terrible fate as our forefathers went through.

In the end, I can only say: “History always provides a Lesson for the wise to learn, but very often the wise go missing, ensuring History to Repeat Itself.”