Memories are still fresh, of ordinary citizens – migrant labourers, men, women and kids, wilting under the load of their meagre belongings, trudging along the national highway on the outskirts of Delhi, all in a hurry to reach the safety of their homes, several hundred miles away.

For those who cared for fellow citizens, raised a hue and cry as video clips went viral with the cops brutally assaulting decent young men (even a women was brazenly assaulted in Haryana, while many made to frog jump on the way) for violating the hurriedly announced 21 day lockdown that barely gave less than 4 hours of preparatory warning.

As the lockdown started bearing results, roads and highways fell silent, tempting many a teens to wish going on long drives. Though none garnered enough courage, thanks to the police, even though the latter had in the meantime turned humane as covid19 pandemic started taking effect.

As the lockdown entered its 4th week, with citizens (both literate and otherwise) giving a thumbs up to the efforts of the government, it so happened that on 8th April afternoon, a security camera installed at a toll crossing in Maharashtra’s Satara captured a Caravan of Luxury cars zooming past, literally testing the limits of the Indian Highways turned Airfield Runways. The Caravan, that comprised of 23 people in 5 SUV’s was led by none other than the (in)famous billionaire bosses of the scam-hit Dewan Housing Finance Limited (DHFL) – Dheeraj and Kapil Wadhawan.

Incidentally the duo, with alleged links to Iqbal Mirchi, are wanted in a fraud investigation by the CBI and had, just weeks ago, skipped the summons from the honourable court to appear for questioning in a money laundering investigation, citing the Corona outbreak. Health is, no wonder, a priority as they had claimed in their exemption applications.

Blowing the ‘social distancing’ concept of many a What’s App university professors to smithreens, the 23, comprising of the brothers, their families, cooks and helpers packed into two Range Rovers and 3 Fortuners and drove some 180 kilometers from Khandala to their Mahabaleshwar Farm House for a holiday.

Among the various pictures that have emerged from the better called “Lockdown Vacation” are the huge fortified gates of the family’s Mahabaleshwar farmhouse, with “Wadhawan House” affixed on them, and a long driveway visible from the gaps of the fortified farmhouse.

The stay at the farmhouse for the family was shortlived, thanks to some unknown vigilantes and some impromptu but honest policeman, that often pop out like shooting stars, only to get mired and vanish forever in the dark skies. The entire group is now isolated and quarantined at the government school at Panchgani

The Wadhawans have been under police surveillance, a CBI court having ordered the local authorities to not let them travel without prior intimation and clearance from the CBI.

The Order that cleared the Wadhawan’s reflects on the functioning of the govts, be it centre or state, wherein the writ of a handful of individuals in power runs large, more like a home kitchen, where ‘my way or highway’ applies.

With comparisions being drawn with largely the on foot march of helpless citizens to their hometowns, hundreds of kilometres away, the outrage over the special passes provided to the brothers doesn’t seem to subside.

More so when no less than the Principal Secretary, Home Ministry of Maharashtra government, Amitabh Gupta is said to be the issuer of the authority that cites personal acquaintance and close ties with the Wadhawan’s as the reason to bring the entire Nation’s efforts to a naught.

Above all, the blatant misuse of power can be gauged from the fact that a government official is issuing orders for a duo who are accused of many a criminal wrong-doings and were under investigation over multiple fraud charges.

The open ended “To Whom So Ever It May Concern” letter read, “This is to just inform you that following are well known to me as they are my family friends and traveling from Khandala to Mahableashwar for family emergency.” Particular of the cars were mentioned along with the names of riders in each car. The letter obtained by N4M over the net is placed here. 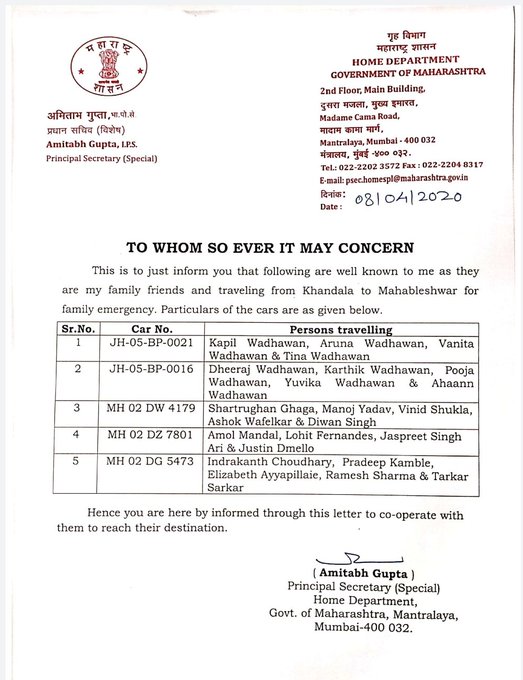 State Home Minister Anil Deshmukh, under fire over the incident, earlier tweeted that the matter will be investigated as to how 23 people could be given permission to travel from Khandala to Mahabaleshwar under a national lockdown. In the meanwhile the Principal Secretary, IPS Gupta was sent on forced leave, till investigations are completed in the matter.

The political blame games and mud slinging ensued with the BJP blaming the state government of Udhav Thackeray for the fiasco, and the state putting it solely on the Principal Secretary, Home.

DHFL, a Non-Banking Finance Company (NBFC) has been in all the wrong news lately, with the latest one being its transactions with Yes Bank founder Rana Kapoor in 2018. Dheeraj and Kapil Wadhawan had non bailable warrants issued against them by a local court for not appearing before the CBI for questioning in the case, which was registered on March 7th.

Under normal circumstances the issuing of warrants, of late, has been seen as an act of harassment unleashed by the Judges in connivance with the Police. This has been more predominantly used in case of business owners and industrialists as it satisfies inflated egos of some black sheep in the judiciary. The latter however do not understand the incalculable harm it has done to the nations business community, which has retrieved itself into its shell, literally becoming one of the predominant reason to the various economic woes that the nation faces, at least till just before the Covid19 struck.

However in case of DHFL, its not so similar a story. The company has been embroiled in many a litigations. Not only funds siphoning, the company is said to be in some more than 500 arbitration cases with its own housing loan clients which speaks volumes of its colossal mismanagement.

In end 2019, Yogi Adityanath had recommended a CBI probe into the investment of Rs 2,631.20 crore EPF of the UPPCL in DHFL which was stuck and gave sleepless nights to the public affected by it.

Also, the DHFL promoters were said to have been earlier grilled by the Enforcement Directorate for their alleged links with a front company of Iqbal Mirchi, a former aide of fugitive gangster Dawood Ibrahim.

The CBI is said to have searched the premises of the Wadhawans on March 9 but they were allegedly missing. However, now that the family has been cornered and quarantined, the investigative agencies have all the time at their disposal to initiate action.