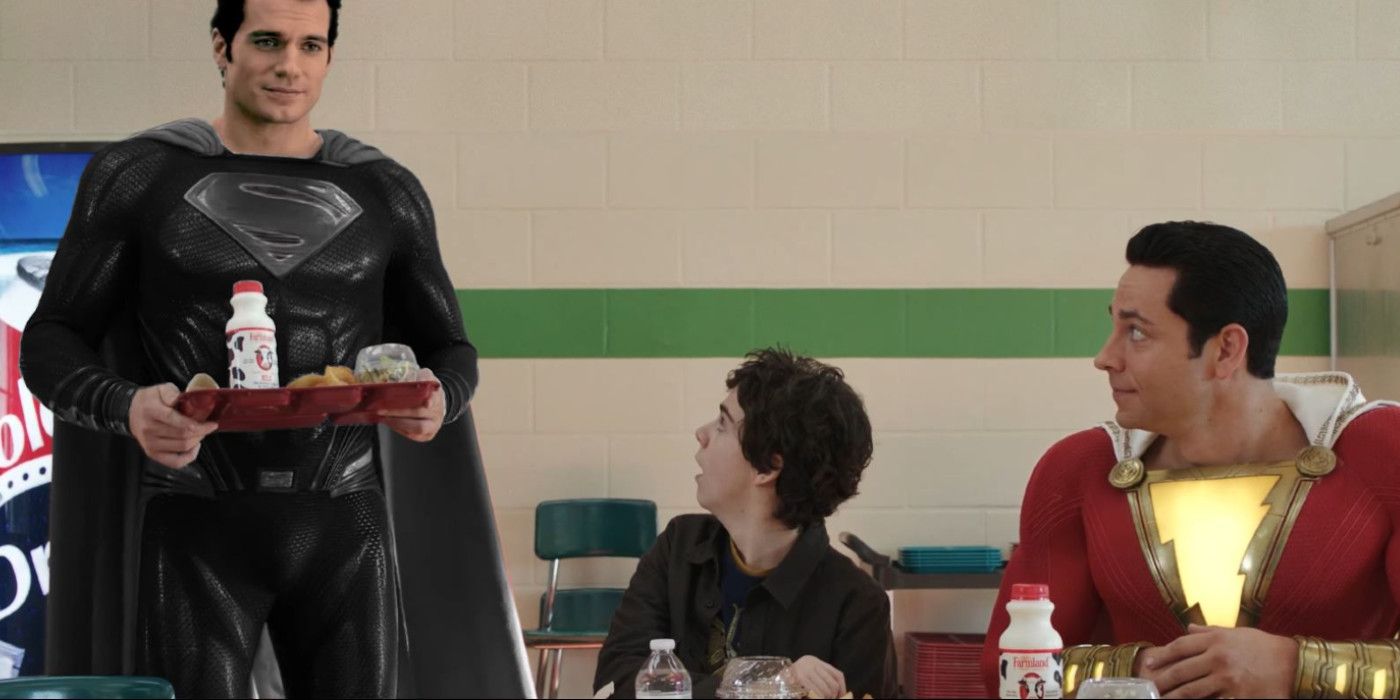 It’s been more than two weeks since Zack Snyder’s Justice League was released. The movie has finally contented fans who were unsatisfied with Joss Whedon’s 2016 version, aka #JossticeLeague. But that’s not all that the 2021 movie has caused. In the immediate aftermath of #SnyderCut, some really dank memes have emerged on the web. Warner Bros have released many trailers that reveal the future of DCEU. And in recent news, fans have updated the ending of Shazam! to include the black suit Superman in a new video edit.

Yep! The end of Shazam! has received a ‘Zack Snyder Justice League enhancement’, with Henry Cavill’s Superman now wearing his black suit in a video edit of that famous cameo. Directed by David F. Sandberg, the instalment was launched in 2019 and took the DCEU in a new direction. Taking on a more upbeat and wish-fulfilling tone, Shazam! told the story of Billy Batson. After moving to a new foster home, the troubled teenager crossed paths with a former wizard. From him, Billy receives the power to transform into the eponymous superhero. Dual appearances were played by Asher Angel and Zachary Levi, respectively.

Billy’s new abilities soon caught the attention of the villainous Doctor Sivana (Mark Strong). To defeat him and the creatures representing the Seven Deadly Sins, Billy teamed up with Freddy Freeman (Jack Dylan Grazer) and the rest of his foster brothers. By granting them similar transformative powers, they became the Shazam! family and DCEU’s first superhero family overall. In the wake of his success in saving the world, Billy decided to reward Freddy. With the entire school watching dumbfounded, Billy joined Freddy (as Shazam!) to have lunch. As if that wasn’t enough, he revealed that he had also brought a friend. Amidst the schoolchildren’s wows, gulps and gasps (including one from Freddy), the friend was revealed to be Superman. (Wow, am I the only one who gets goosebumps on revisiting that ending scene?)

Also Read: Elon Musk Brings Cheer To Tesla’s Indian Fans – Car To Be On Road In 2020

Unfortunately, due to scheduling, the role was played by an understudy. As such, Superman’s face was never revealed; only his disguise was made visible. Since then, the scene has led to countless edits by fans, some adding Cavill’s version of Superman completely onto the scene.

The last one was recently published by Movila on Youtube. However, instead of the traditional red, yellow and blue suit, the new video showed Superman wearing his famous black suit. Other than that, the scene remains completely unchanged. Composed by Alessandro Costanzo, the result is an incredibly combined scene that is sure to please many fans. Check it out below:

Cavill first debuted as Superman in Man of Steel (2013) and later returned for multiple (divisive) sequels. Other than the aforementioned cameo, the character has yet to make a NEW appearance in the official DCEU. Cavill, however, reprised the role in the highly anticipated Justice League Snyder Cut. Released via HBO Max, Snyder’s version of the DC Comics team has proven to be definitive for many and has been more well-received overall. One of the most crowd-pleasing elements, among many, was seeing Superman in the black suit above. Regardless of the film’s success and a renewed passion for him in the role, Cavill’s future as Superman in the DCEU remains unclear for now.

However, that hasn’t stopped fans from campaigning fiercely. Following the success of the ‘Release the Snyder Cut’ movement, things have changed to ‘Restore the SnyderVerse’. Despite Warner Bros’ commitment to parting ways with Snyder’s original vision, the opposing hashtag has racked up more than a million tweets. The video above will almost certainly spur such efforts. After all, Superman was still wearing the black suit at the end of Zack Snyder’s Justice League. As such, Black Suit Superman, who appears in Shazam! would mean that he was adhering to his continuity on the theatrical cut. However, even if such retcons are never fulfilled, the video will at least be a fun sample of what could have been…

OTT Platforms – What Does Modern Media Streaming Landscape Look Like?

How Much Has The Portrayal Of Minorities In Films Really Changed?