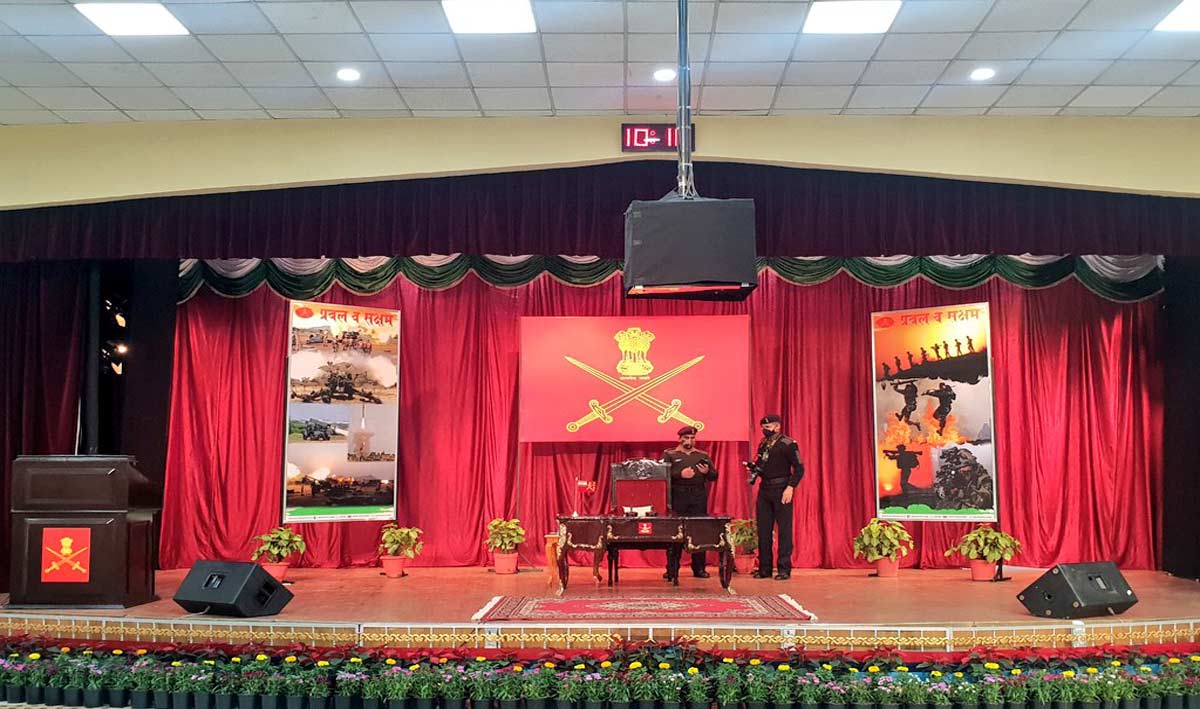 Generally, officers of the armed forces go blue in the face at the slightest hint of politicisation of the officers.

As Lt. Gen. DS Hooda (Retd) had noted in April 2019, the apolitical nature of the army has been a great boon for our democracy. It is both good and fortunate, particularly when we look at the troubled history of our neighbour.

His comment had come in the wake of a controversy regarding a letter allegedly written by some 150 veterans to the President over alleged politicisation of the services. Later, some officers backed out, but some like Maj. Gen. Harsha Kakkar stood by it.

Contrary to popular perceptions, the supposed apolitical nature of the officers has nothing to do with their professionalism or patriotism. One could be a thorough professional and yet harbour dangerous political, religious, caste or communal biases. He could always put India first and yet discriminate amongst its citizens.

I agree that Indian citizens are free to hold whatever personal or political beliefs they want. There is no concept of a ‘thought crime’ in India. For example, one could personally believe in untouchability; however, as long as he does not violate the Protection of Civil Rights Act, 1955, he cannot be punished for his belief.

As long one remains a government servant, he is restrained by the respective Service Rules and thus there is little chance of his beliefs coming in the open. After retirement, once he joins politics, that restraint is removed. That too is not a crime.

However, it leaves him vulnerable to an allegation that he might not have been fair in his dealings while in service. A senior police officer, for example, who joins a particular political party after retirement, leaves himself open to doubts that, while in service, he was partial in dealing with the cases of rival political parties in conflict with the party he joined later.

In the context of the armed forces, as Lt. Gen. Vijay Oberoi (Retd) points out, if the military also became like ‘committed bureaucracy’, voters might reasonably assume that the party might not be able to control the military if voted to power. This could lower the public’s confidence either in the party disfavoured by the military, or in the military itself, and damage the functioning of the government.

He rightly observes that when senior officers of the armed forces come out in the media and giving their pro-government political views in public,no clarifications or later goody-goody comments can wipe out the adverse impact of what was spoken publicly and widely reported.

Air Vice Marshal Arjun Subramaniam (Retd) has sought to differentiate between politicization of the military and leveraging the gains of successful military action, or exploiting the fall-out of military failures, for political gains.

Their target is the mind of the public. They know that in popular perception, for historical reasons, certain prestige is associated with the armed forces, which civil services do not enjoy. A common man would perhaps readily accept that a SHO is corrupt but could hesitate before accepting that a captain is corrupt. For historical reasons, officers of the armed forces have carried with them an air of integrity, which their counterpartsin other departments do not have.

When a political dispensation ‘cites’ the moral or intellectual support of an armed forces officer for deriving legitimacy or approval, it wants to cash on that ‘historically derived prestige’. They know that then the people would take their claims more seriously.

I agree with Rahul Bedi when he points out that in this debate, the officers’ culpability in pleasing the politicians is rarely dwelt upon merely because the military is historically treated as sacrosanct, or as something, which can commit no wrong.

An insider like Lt. Gen. Vijay Oberoi (Retd) is competent to authoritatively comment that amongst senior officers, the appetite for higher ranks and fulfilling other material ambitions, including amassing the filthy lucre, may make them abandon their inherited organizational psyche of ‘no politics’; ‘no religious or gender discrimination; and ‘no caste or ethnic bias’.

It is this possibility of being inadvertently ‘exploited’ for political purposes that the officers of the armed forces must guard against. Speaking at an event called ‘Dialogue on National Security’ at Chandigarh in May 2019, Lt. Gen. DS Hooda (Retd) had rightly observed that it was ‘worrisome’ that the military was increasingly being drawn into the political discourse and used to win political arguments—as something which generated success in the elections. He cautioned that ultimately in the long run, it was going to impact the army’s impartiality and apolitical character.

Lt. Gen. Vijay Oberoi (Retd) rightly observes that a politicised military is one that exercises loyalty to a single political party and/or advocates for and defends partisan political positions and fortunes.

When Air Vice Marshal Arjun Subramaniam (Retd.) and Bharat Karnad sought to dismiss the apprehensions of politicisation as ‘alarmist’, they were not able to foresee the possibility of the ‘reputation’ of the officers of the armed forces being unknowingly ‘used’ for purely political purposes.

For example, there could be a thousand doubts regarding a particular military operation across the border, which the political leadership might have tom-tommed for political benefits. The people of the country have every right to raise doubts on what a government claims.Why should they not raise doubts? Which law decrees that the official version of a government is the ultimate truth?

Rulers, throughout the course of history, have been telling lies to their people.History stands witness, every nation that has ever lost a war, had been telling its people that they had been winning on all the fronts until the moment it capitulated! As John W. Dower documented in his masterful, Pulitzer-winning history ‘Embracing Defeat: Japan in the Wake of World War II’, until the two nuclear bombs, the Japanese leadership had been speaking of ‘fight to the bitter end’!

Also Read (From the Archives):

Problem arises when doubts and debates are sought to be quelled citing the ‘moral authority’ or ‘technical expertise’ of certain serving officers and it is implied that questioning that amounts to insulting or worse, demoralizing the armed forces.

No, it is wrong. There is no reason to believe that any government or the officers of the armed forces are paragons of virtue. Refusing to accept anybody’s version as the ultimate truth is neither unpatriotic nor amounts to demoralizing the armed forces.

As Rahul Bedi correctly observed, “This cosy relationship is further cemented by the soldier and politician jointly ‘inventing’ triumph and manufacturing success through an increasingly pliable media. Doubtlessly, this furthers their respective interests, but ends up insulating public opinion from insider reality.”

The pursuit of truth must never fall victim to any hierarchy or authority. We are all humans and everybody is fallible. There is no reason to believe that the word of a certain government servant is the word of God! This is what I mean by ‘leveraging’ the armed forces for political gains.

Since the past few years, a new phenomenon has been noticed in our country. Whether we call it by the name of militarism or not, there is no running away from the fact that the Indian society has started an undue, unwarranted glorification of the military, military hardware and its place in the life of the nation. Indians have started literally ‘worshipping’ the soldiers.

Soldiers are regarded as the epitome of patriotic citizens who serve the nation in a way no other hard-working, toiling-his-guts-out citizen can ever hope to do, irrespective of whatever yeoman service he might be rendering to the nation. Every day we are fed the sentimental crap of ‘When you go home, tell them of us and say; For your tomorrow, we gave our today’ and ‘We sleep safely in our beds because the soldiers stand all night to protect the nations’ borders’, etc.

The military men have becomes victim of this rhetoric. As a result, the people swearing by this narrative feel free to deride whoever that does not agree with them as unpatriotic, traitor or a Pakistan-supporter, all with the unstated ‘blessings’ of the men in uniform.

Lt. Gen. H. S. Panag (Retd) says that today the lines between the armed forces and the regime in power are being blurred. So much so that if you criticise the government for not doing enough to deal with China following border skirmishes in Ladakh, they say you are criticising the army.

He minces no words when he says that the army’s top brass is perceived to be closely aligned with the ruling party’s ideology. “Some statements by the former Chief of the Army Staff about Bangladeshi immigrants, anti-CAA protests and his act of decorating and defending the rogue officer who used a human shield in Kashmir, are worrying.”He points out that behaviour of the hierarchy percolates down to the soldiers. This ‘percolation’ is a matter of serious concern.

He had taken strong objection to the Eastern Army Commander, Lt. Gen. Anil Chauhan making a partisan political statement in a public forum, “The current government is keen on taking hard decisions that have been pending for a long time…The Citizenship Amendment Bill was passed despite reservations from a couple of north-eastern states. It would not be hard to guess that some hard decisions on Left-wing extremism may be on the anvil after this.”

He observed rather sarcastically that 2019 was the year when the Indian armed forces were exploited for politics, from Balakot to Kashmir to CAA. He noted that senior officers of the IAF publicly defended the government’s Rafale jet deal with France’s Dassault by giving statements that went beyond their role, which pertains to the evaluation of the aircraft, specifications of technical and weapons package, and the long–term contractual obligations of maintenance and upgrades. Their defence was more about the financial terms of the contract and offset contract, which had political undertones. This raised serious questions about the neutrality of the armed forces.

Let us be clear, this sort of behaviour of the senior officers has nothing to do with ‘empowering the military further or hearing its voices in the public space’. Nobody objects to these; however, the people of the country must indeed object to those who are allowing their ‘heritage’ to be ‘used’ for vested interests.

Officers of the armed forces joining political parties after retirement, contesting elections, becoming ministers, or being given post-retirement employments is not politicisation. Politicisation is when, while in service, they allow the prestige and authority of their post and uniform to be ‘used’ for political gains of a certain party.

(Dr. N. C. Asthana is a retired IPS officer and a former DGP, Kerala. He is the author of 48 highly acclaimed reference works on various subjects, 76 research papers and 62 articles. He tweets @NcAsthana.)