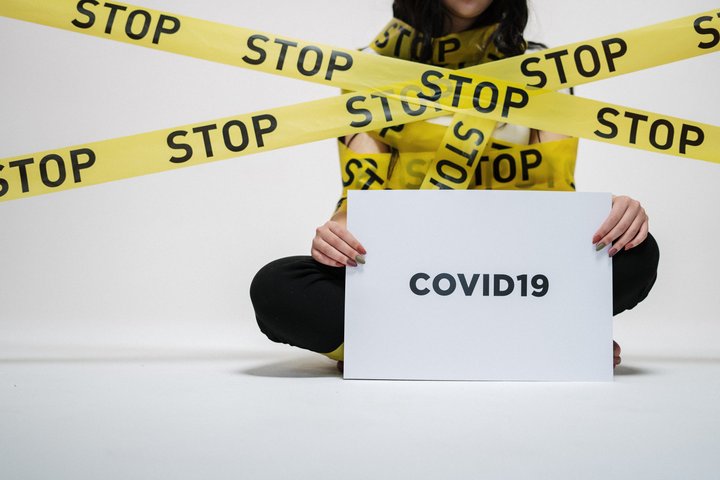 While we moved into the 4th month of the lockdown, our society gates closed for outsiders and our home open only for ourselves, the Corona Virus had made a silent entry into our home.

The chosen one was my husband. So here he was, going out within the surrounding areas, with due precautions for purchase of essential supplies. During one of those days, when the weather was making its mind whether to be sunny or rainy, he developed low grade fever, which started at  just about 99.5 degrees F.

How It All Began

Contrary to the most common symptoms of Covid 19 viz a viz sore throat, cold, cough, tiredness, lack of taste and lack of smell, upset stomach, the only symptom that he had initially was mild fever which gradually started fluctuating between 99.5 deg F to 100.5 deg F. Since the fever persisted for more than 5 days,  thenext step was to get a CBC test, a complete profile test of the blood. A day of waiting and the results showed that there was a  bacterial infection and also urine infection. And all this while, the trouble maker virus was getting more comfortable in the body. It had shown its presence in the form of an increased level of CRP (35 as against a normal level of 6) which somehow wasn’t taken seriously by the general physician treating my husband as the Spo2 levels were at 96/97 (and mind you there was  second opinion sought too). For the uninitiated, SPO2 Level is the oxygen saturation level that can be monitored by a small device that has to be placed on your index finger and just like a BP / Blood Sugar monitor, this shows the result within a few seconds. The ideal saturation level is  between95 to 100 .

So now the efforts began to deal with the infection  in the body while the most popular virus of 2020 continued to take up more space in the body. Since there were newer anitbiotics that were introduced, there was persistent fever and it hardly went beyond 100.5 degrees temperature. To add on, as mentioned earlier, there were absolutely no other symptoms; it seemed like just an extended viral fever.

However, once the dosage of the antibiotics were over, the virus finally showed its existence in the form of high fever in the range of 102 and 103 plus that lasted through the night refusing to go down even with the help of a paracetamol. By then, obviously the warning bells had begun to ring. A third physician was called and briefed about the reports and the medications and she was almost certain of it being Covid.

Finally, we headed for a personal visit to the our regular Doctor and  aCovidswab test was recommended. A chest Xray was done immediately, alongwith a blood test again. The Covid test too was done, at a Government certified lab, by taking a nasal swab and a throat swab. It just took a minute to get that done, the results of which would take around 24-72 hrs. The Chest Xray confirmed some patches in the lungs. 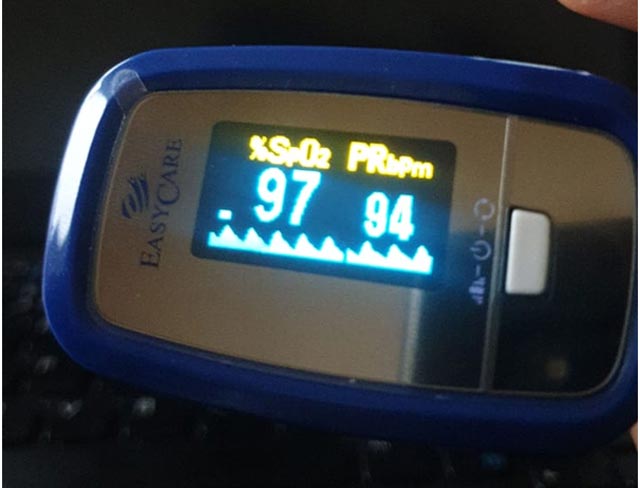 Considering that the results of a Covid swab test would take time , a CT scan of the lungs was recommended so as to measure the extent of the virus. The CT scan tests revealed that the situation was a bit alarming and could get worse. There were several patches on the lungs, which indicated a classic case of Covid. To top it, his SPO2 levels (checked with the help of an oxymeter) was fluctuating between 94 and 95. This was confirmed to us by our physician during our personal visit (while we were under the impression that anything above 90 is good enough). In effect, this meant that he needed to be hospitalized.

I must add here, that for the past few years, I have turned into an eternal optimist, who swears by the Law of attraction and yet I too didn’t want to give into this option of hospitalization. The only reason being he would be in isolation and none of us would be around. Two things; one our inability to monitor anything that is related to him in those crucial days and two, our lack of trust. The next 2 hours were spent in trying to avoid the hospitalization. I got in touch with a relative working at a senior role in a private hospital. She suggested that I get in touch with a doctor from their Covid Team who would assist the patient with Home Quarantine do’s and don’ts and also help in monitoring his progress for a nominal fee.

Not Salvation But Return To Serving Suffering Humanity

So at 2300 hrs at night, I was on a call with this doctor who happily guided me on what we needed to do. He asked my husband to do a 6 minute walk test and check his SPO2 levels at the start, mid and end of the walk and to revert to him with the result. But since the SPO2 level dropped to 91 at the end of the walk, combined with the many patches on his chest, this doctor too suggested a hospitalization. Next day, this relative could arrange a bed for us and there we were getting him admitted to the hospital.

After about 3 hours, he was finally admitted and placed at a suspect Corona ward. Next day morning, he got calls from the local municipal ward about the results of the Covid test done and inquiring for details of other family members. In the next 30 mins, the report was sent on email which as expected was positive.

The hospital staff shifted him from suspect Corona ward to Corona isolation ward, which was a twin sharing room. He was administered with Steriods (IV form)  AntiVirals, Blood thinner injections, at times Insulin ( as sugar levels would spike because of steroids), Vitamins and Zinc capsules. A spirometer was given for inhaling which would assist in improving the lung function. Blood tests were carried out daily in early morning schedule . They also administered Nasal Oxygen as the SPO2 levels were at 93/94. All instructions were followed especially the most important one which was to lie on the prone position i.e lie on the stomach or on sides BUT NOT to lie on the back. Prone position would get more oxygen to lungs which would improve breathing and oxygen levels.  Normal breathing exercise – Pranayam was also a factor which helped healing. 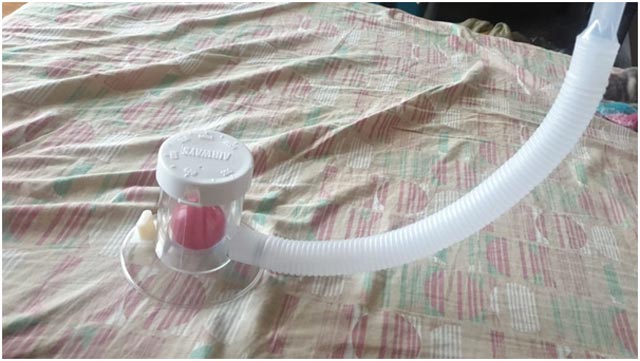 After 3 days, the Nasal Oxygen was taken out as the blood samples were all coming back to normal. By the 5th day, they asked him to take the 3-6 min walk test and measured the Spo2 levels which was at 97/98 and he was all set to be discharged . They asked him to be in precautionary isolation for 8 more days . Steroids were given in oral tablet form which were to be tapered down over the next 10-12 days along with Vitamin C and Zinc tabs. All through this during the stint in the hospital, he was able to stay in touch with the family through phone and video calls. He was mobile and attending to his needs independently.

It was a battle fought and won because of early detection, taking preventive measures and ensuring that the virus was not allowed to replicate and cause further damage. It’s not only the Corona virus that damages, there are bacteria, parasites and other elements which arise because of Corona and all of which needs to be attacked at the same time inside our body. Yes, it also depends on how healthy a person is and if he or she has any co morbidities which If present would further cause complications. But even in such cases, early detection helps in fighting this battle successfully. Also, not all patients who test positive need hospitalization. It depends on various factors like fever, SPO2, other co morbidities and so on.

Though of late, the word POSITIVE has become a fearful word….BUT if one is tested positive, what matters most is being POSITIVE in mind  and reassuring yourself that it’s just another virus and that you will come out successfully. Although being anxious is understandable, being in a state of panic is avoidable. The support of family and friends is what helps you maintain your peace of mind, even in times of such anxiety. I was pleasantly surprised when acquaintances on Social media, who are actually strangers lent their pieces of advice and support to me during this period.

It was also extremely heartening that the neighbours and the society members (including the security and housekeeping staff)  were ever willing to help us and provided all necessary support for us during our home quarantine period (2 weeks).

However, it was a bit disappointing to see that the  insensitivity of the Municipal Corporation. This pertains to the banner that they put up outside our home, as a notice to the others  that we have a Covid patient in our house. The banner was a huge one, covering ¾ of my door and  maybe a bit depressing and some may find it demeaning to see something like this put up outside the door which kind of ostracizes the family. It could simply be a small board or a poster  placed at a wall near the door rather than something that covers the entire entrance of the house.

Nevertheless, during such a Pandemic, such slips may be unavoidable and to give due credit to them, from a situation where they used to seal the entire building, now they seal only the house (provided the building has elevators ). They too  are learning as well on how to handle this pandemic

Last but not the least, to all the Covid warriors out there be it  the Doctors, Nurses, staff at the hospitals, the police and other state machinery who are risking their lives daily to ensure all safety norms, the various volunteers and  NGO’s – A BIG THANK YOU for all your efforts . May we all stay healthy and happy.