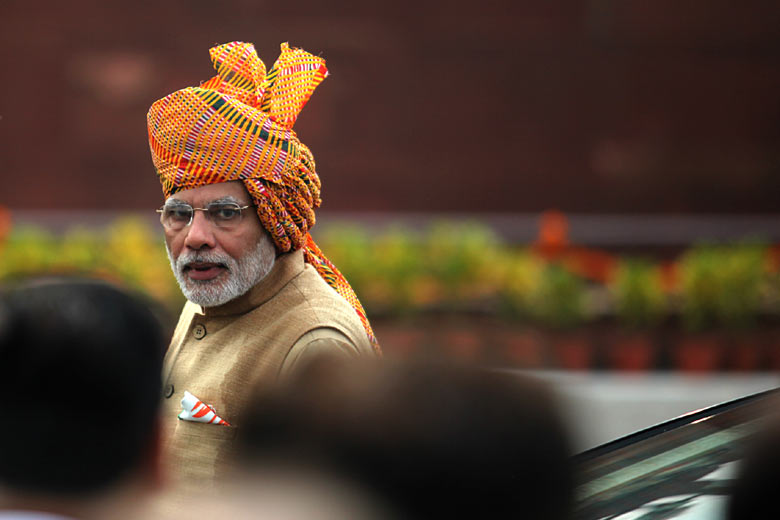 Per common perception of some Muslims in India, the community had started giving up hope of ever making it to the good books of India’s Prime Minister Narendra Modi. However on Sunday, the nation was in for a surprise when Narendra Modi hailed the Muslim organisation Jamiat-Ulema-e-Hind, saying its volunteers had recently cleaned 22 temples and two mosques affected by floods in Gujarat, setting a “fine” and “inspiring” example of unity

He noted that India is a land of diversities which are not limited to cuisine, lifestyle and attire but can be seen in every walk of life

“Gujarat saw devastating floods recently. Many people lost their lives. When the waters receded, there was so much filth everywhere

“That is when, in Dhanera in the Banaskantha district of Gujarat, volunteers of Jamiat-Ulema-e-Hind cleaned 22 affected temples and two mosques in a phased manner,” Modi said in his monthly radio programme ‘Mann Ki Baat’

He said the Jamiat volunteers came together and toiled collectively

“The volunteers of Jamiat-Ulema-e-Hind set a fine, inspiring example of unity for cleanliness. If this committed effort towards cleanliness become inherent to us, our country will certainly take our nation to greater heights,” the prime minister underlined

In his 30-minute broadcast, he pointed out that India has a rich cultural heritage, spanning thousands of years, and in this context, talked about the festivals which are replete with diversity

“When we look at our cultural traditions, social customs, historical events, there would hardly be a day left in the year which is not connected with a festival,” he said

He said the Indian festivals follow the almanac of nature and there is a direct connect with nature. “Many of our festivals are linked straightaway with farmers and fishermen.”

He mentioned festivals like ‘Samvatsari’, celebrated by the Jain community on Saturday, as also Ganesh Chaturthi, Onam, Navaratri in Gujarat, Durga puja in Bengal and Eid-ul-Zuha. He extended his greetings to the nation regarding these occasions

“The festival of Samvatsari is symbolic of forgiveness, non-violence and brotherhood,” Modi said

He also quoted Shakespeare’s play ‘The Merchant of Venice’, saying it explained the importance of forgiveness as it spoke about “Mercy is twice blest, It blesseth him that gives and him that takes”. It means the forgiver and the forgiven both stand to receive divine blessing

Referring to Ganesh Chaturthi, he said this mega festival stands for unity, equality, integrity and honesty. “My heartiest greetings to all of you on the occasion of Ganeshotsav,” Modi said

Onam, which is mainly celebrated in Kerala, showcases the rich cultural heritage of the state and gives the message of love and harmony, awakens new hopes and aspirations, and gives new confidence to the people, he said

Festivals like Navaratri in Gujarat and Durga puja in Bengal are tremendous tourist attractions, he added

“In this series of festivals, Eid-ul-Zuha will be celebrated in a few days from now. Heartiest felicitations and best wishes to all countrymen on the occasion of Eid-ul-Zuha,” the prime minister said

He said festivals are symbols of faith and belief and in the ‘New India’, “we should transform them into symbols of cleanliness as well.”

“Public cleanliness must be insisted upon not just in our homes but in our villages, towns, cities, states and in our entire country ? cleanliness has to be inextricably linked to our festivals,” Modi said.