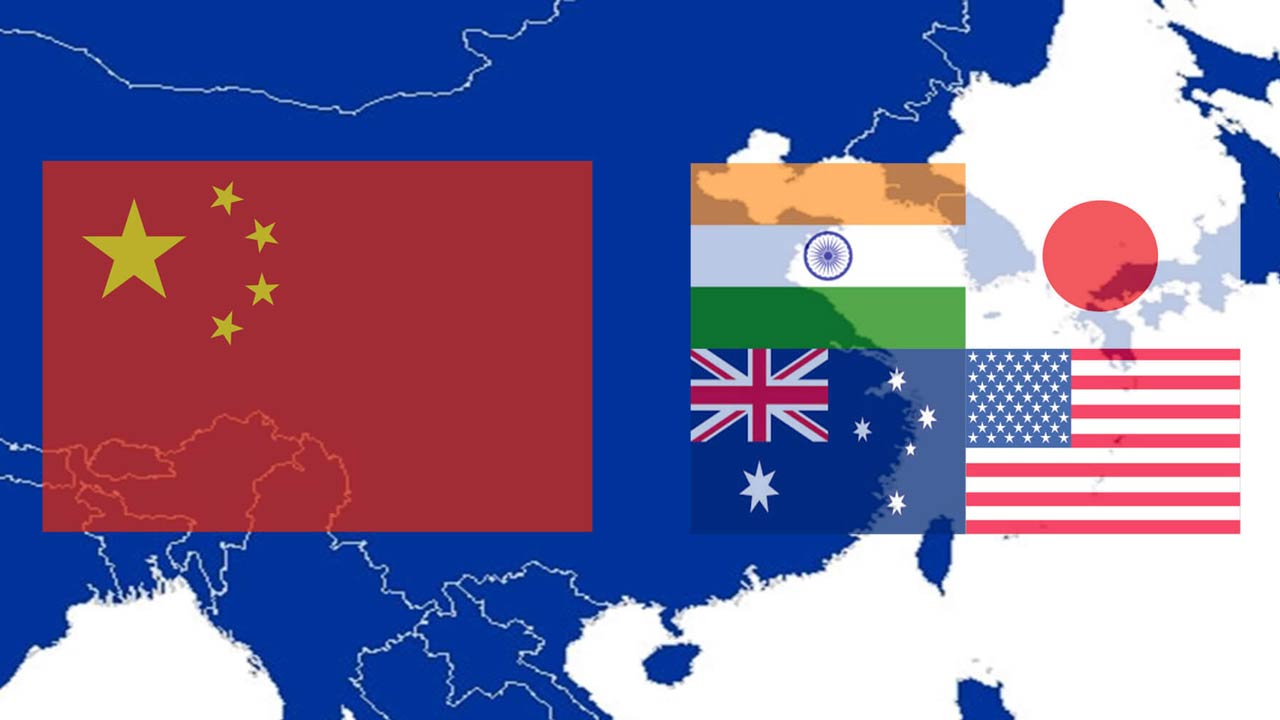 The above statement from Biden in a recent interview is largely seen to be outlining the course of action of the Biden administration while dealing with China and could have far reaching consequences. The interpretations vary but the statement becomes specially significant for the four from the QUAD. Many have even associated it with America’s unwillingness to engage China, that had been an important partner, inextricably entrenched in the US trade and commerce.

Before we contemplate on what is ahead for QUAD and the Indo-pacific, in a Post-Trump, Biden era, let’s first understand a bit about QUAD and its genesis.

QUAD and the Quadrilateral Security Dialogue

The group first came to light in the year 2004 in response to the challenges of climate calamities like earthquakes and tsunami in the Indian ocean area.

The group of four (Quad) comprises of Japan, Australia, USA and India. All the four countries are in the Indo-Pacific region. The Quad members are democratic nations and claim to be focused on rule-based order. Australia as a member has moved back and forth, leaving the Quad in 2007 under pressure from China, only to join it later.

These countries have been putting up with the expansionist policies of China at sea as well as on land. Each country in the group knows too well that they cannot counter China’s policies unilaterally. Thus the need to group together, to safeguard common interests and concerns, beyond merely facing climate calamities, became imminent.

Since then the cooperation has only increased and taken the shape of a strategic group which happened in 2017.

The group remains largely informal, but has been constantly growing ideologically against the various moves and ideological threats from China. In a way, the QUAD is a psychological counter to the Chinese policy of expansionism and its aggression and primarily proclaims to keep the sea routes free of Chinese expansionist policies in the Indo-Pacific region.

Disputes of Quad members with China

The Quad members have various border disputes with China. There are as many as seventeen territorial disputes that China has with it’s neighboring countries, both on land & sea.

According to the Auditor-General’s reports between 2016 to 2019, the Chinese military encroached 89 times into its neighboring countries’ territories. Across the world many nations came forward to criticize Chinese government policies of expansionism as were evident in it’s clubbing to death of 20 Indian soldiers in the Galwan valley

India and China border disputes started a long time ago. Both countries even went to War in 1962 and China captured huge swathes of Indian land.

Australia and China relations touched a low ebb when a Chinese spokesperson tweeted an allegedly doctored image of an Australian soldier holding a knife on the throat of an Afghan boy.

The tweet upset the Australian Government and it demanded an apology from the Chinese side, but the Chinese establishment didn’t budge. The relations between the two countries further plummeted when Australia banned foreign political donations because there were inputs of Chinese attempts to influence the political process.

The United States has always been a vocal critic of China and its policies. It has consistently rejected Chinese claims in the south china sea and has always stood up against China’s bullying of smaller countries in Asia.

Also Read: India Has A Strong Case – Dealing With The Dragon

Trade between Quad Nations and China

The trade relation between Quad members and China have also not been going well.

The bilateral trade relations between Australia and China remain badly affected because of some events in the recent past.

Many Australian vineyards will collapse if Beijing stopped importing wine from Australia.

The Australian economy has already entered into an economic slowdown.

China India has a long history of liberal and open trade practices despite having several border issues on LAC.

China is also an exporter of API for the Indian pharmaceutical industry.

35,000 Japanese companies had been functioning in China and because of the ongoing trade war between the two countries and the geopolitical situation around the world, Japan had to give a shout out, urging them to come back to Japan.

Tokyo is even providing subsidies to firms returning.

The trade between the US and China amounted to over 500 billion dollars.

Coming back to our topic, it’s becoming increasingly likely that the United States’s own interests in the Asia Pacific will heavily weigh over it’s decisions to actively engage with the QUAD and secure it’s relevance.

The US Presidential baton has changed a couple of times ever since the QUAD came into existence or into strategic relevance. To observe the consistency (or inconsistency) of the US, let’s check the actions by the past leaders, both the Democrats and the Republicans of the USA.

President Obama frequently talked about the territorial integrity of smaller countries and extended his support for freedom of navigation in the ocean and criticized all kinds of encroachments.

Trump was firm against China and his last year in office saw relations between the two countries touching a new low. Under him, Mike, Pompeo both rebuilt the Quad and encouraged its members to stand up against the Chinese aggression in the region.

The Democrats are known for their skills, playing with the words and the recent statement that Biden made in an interview, comes as no surprise. To re-quote, though we discussed above, he said “We need not have a conflict but there’s going to be extreme Competition”

Biden will be more inclined to secure it’s interest in the Indo-Pacific rather than in issues of the Quad members. The Quad group remains informal and the members need time to prepare its framework. The relevance therefore still remains miles away.

Mike Pompeo even showed his interest to open Quad for ASEAN countries but for now, ASEAN countries may hesitate to join Quad because they can not upset China and put their business interest with China in jeopardy. Asean group remains as one of the largest trading partners of China.

The future of Quad will also depend upon the determination and the collective firmness of group members against any challenges thrown at individual member nations.

Japan and Australia have already reinforced the Quad bond in their respective messages to Biden.

Prime Minister Modi and US President Joe Biden also reaffirmed commitment to strengthening the Indo-Pacific framework in their first conversation since Joe Biden took over as POTUS. However their differences over Quad, democratic values and the upheaval in Myanmar were evident from the final statements put out by their respective countries.

The White House cited joint collaboration and cooperation “to promote a free and open Indo-Pacific” as well as “stronger regional architecture through the Quad”. On the other hand the Indian statement, did not mention Quad. It simply stated Modi and Biden expressed commitment to “working with like-minded countries to ensure a rules-based international order and a free, open and inclusive Indo-Pacific region”.

However still, one can say that the Quad despite it’s tumultuous journey, is now way more than the humanitarian help and climate disaster relief that it was set up for. Now the group members mainly focus on “a free and inclusive” Indo-Pacific region

As the Biden Administration gets into the groove, it remains to be seen whether the QUAD will overcome its own member differences and launch itself into relevance, though highly unlikely, as the things stand, on date. Alternately the QUAD could drift on at it’s own pace, till such time it’s scope and direction are formally agreed to, frozen and signed by it’s member nations.