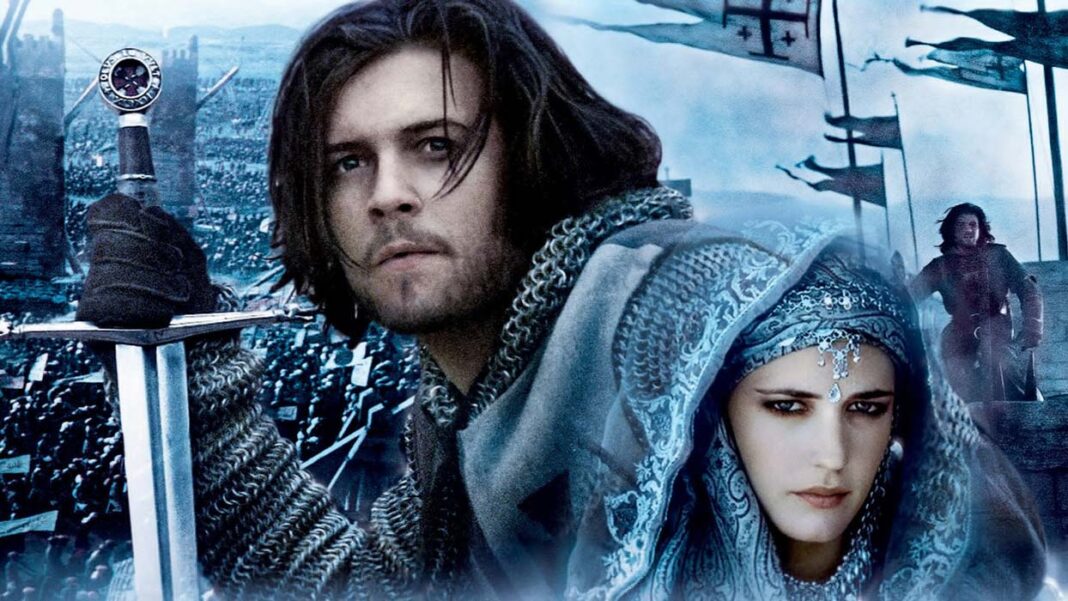 The movie is undoubtedly based on a true story about the Second Crusade fought between Saladin and the Crusaders. However, it is full of historical inaccuracies dedicated to prop up the director’s proposed solution for the Middle East imbroglio.

The biggest problem with this solution is that it presents the entire issue as existing essentially between the Christian and the Moslem. Never once in the course of the film, he even refers to the Jewish point-of-view. There is none in the film who represents it.

It may be that he considers the solution he offers to the Christian side to be viable for the Jew as well. But if that is how he views it, then he is greatly mistaken in his thinking. Because the Jewish perspective is completely different.

Turning to the film itself, Ridley makes it amply clear at the very outset that the issue is deeply rooted in religious beliefs held by the two sides involved in it. He shows the conflict in the Holy Land against the backdrop of the situation that prevailed in France of 1184.

Balian’s personal situation represents it amply. He loses his baby, and his wife, who is not able to endure it, commits suicide. A priest insinuates the thought that his wife is in Hell because she has committed suicide.

At this very juncture, Godfrey arrives on the scene to declare that he is his father. He seeks his pardon and invites him to join him in the Holy Land. Balian denies him both. Thereupon Godfrey leaves the scene, saying that he is seeing him for the last time.

Soon afterwards he kills the priest who had stolen the cross that his wife was wearing in her neck. It gave him some solace that she lay in her grave with the cross. That priest denied him even that. The whole situation perfectly brings out the moral, religious, spiritual and social degeneration that was widespread in Europe. It explains why the Dark Ages were called dark.

The idea of Crusade was touted as a means to achieve salvation. The purpose of Balian’s life is to seek this very thing for his wife and himself. But his rational mind is riddled with doubts concerning the importance that is attached to the Crusade in this regard. Godfrey tells him that he would find out the truth about it when he would reach Jerusalem.

When Balian reaches Jerusalem, the very first thing he does is to spend a night in the place where Jesus was crucified and died. He prays for his wife and himself. He expects to receive some sort of answer from God that would ensure him of the fulfillment of the purpose for which he is there. But nothing happens. So he loses faith in religion.

All that remains now is to replace that religion with bravery and righteousness. It is most probably Tiberias who says that the righteousness surely does not mean what God wills. It lies here (in mind) and here (in heart), he says. It is wrong to locate it in Jerusalem because right from the time that he arrives in Jerusalem, he sees nothing but evils committed in the name of religion.

What is startling is Ridley’s attempt to cast in mist the hope that Bible offers to the world that when Jesus comes into the world for the second time to establish His Millennial Kingdom, He will set everything right. This he does by putting spin on one popular belief that when Jesus returns to the earth the next time for the purpose already stated, He would enter Jerusalem through the Golden Gate and make the city the capital of the world. Suleiman the Magnificent shut the gate in order to challenge the whole idea. Ridley does exactly the opposite for achieving the same purpose.

When Saladin lays siege to Jerusalem and attacks the walls of the city, Ridley makes it a point to show that it is the Golden Gate that is the weakest point in the city walls. Saladin assails and destroys it and through it he makes a triumphal entry into the city.
Balian says, “If this is the Kingdom of Heaven, then this is the will of God and let it prevail.” He means to say that this is the Kingdom of Heaven and it is God’s will that the Moslem should rule it…and Christians should accept it.

But to Sybilla this argument cannot be acceptable because she is the queen of Jerusalem. Therefore, the loss of Jerusalem is a completely different thing to her from what it is to Balian. Balian, in order to present the surrender of Jerusalem in acceptable terms to her, suggests to her that Jerusalem was her father’s kingdom and it is in his mind and in his heart and he will never surrender it to anybody. Another suggestion that reinforces his argument is that the queen is after all a woman just like any other woman. With this Ridley is done with the Christian side of the problem.

But, the Moslem side of the problem is yet to be solved! Ridley is not the kind of man to leave his recipe (in the form of Kingdom of Heaven) half-cooked. In order to cook it thoroughly he makes Balian ask Saladin at the time when the terms of surrender of Jerusalem are agreed upon between the two: What does Jerusalem mean to you? Saladin says, “Nothing,” and just when he turns his back on Balian to return to his camp, he turns again for a split second to complete what remained unsaid, “…and yet everything.”

‘Nothing’ is easy to understand but what does ‘…and yet everything’ mean? Well, it shows the typical Islamic attitude toward the issue. Jerusalem is truly nothing for the Moslem but if it is with the Christian, then it becomes everything for them. Balian says that they can have it alright but not at the expense of Christian lives. And for the sake of the Christian life, the Moslem must come to the table for diplomatic settlement of the problem. And if they don’t accept this, then they must face a prospect in which they will find the Christian pulling down what the Moslem considered to be one of the holiest shrines of Islam. It is this threat that makes Saladin give in to Balian’s demands and give free passage to the Christian to return to their own land.

The Moslems are also asked to be more tolerant toward the Christian faith and allow its followers to live peacefully with their own religious views. This is suggested to them by making Saladin take up the cross that was lying on the ground and installs it in its place with respect. He comes walking on the aisle of the church and at his approach the banners bearing the cross drop down one by one and then he bows down to observe namaz (prayers) in the church.

This is THE END! And we have the solution that we can fairly expect from a professed agnostic like Ridley Scott.