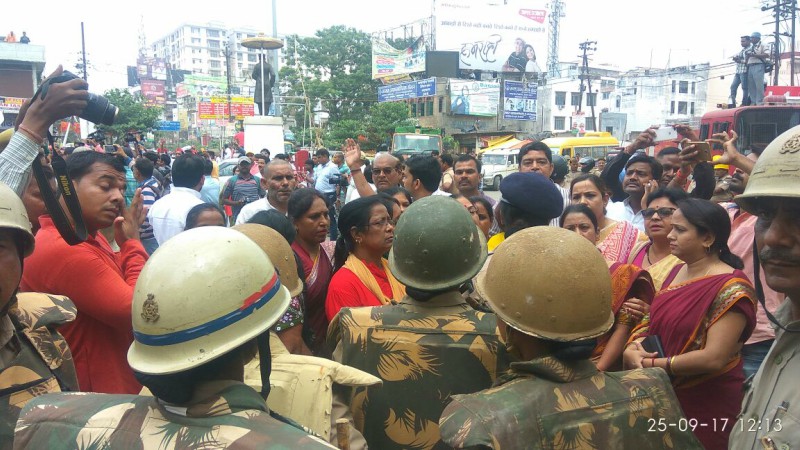 In one of the most disgraceful acts, the police lathi-charged a group of students who had staged a sit-in at the main gate of the BHU. The students wanted to meet the VC after a female student of the Arts Faculty was allegedly harassed by three motorcyclists inside the campus.

According to the NDTV report, the students said that the police lathi charged them without provocation and alleged that the cops even tried to enter the women’s hostel. To add to the fury of the students, the BHU administration questioned the girl as to why she was out after 6 pm?

The disgusting act is condemned by one and all. Samajwadi Party president Akhilesh Yadav condemned the lathi-charge of the students in BHU. “The government should resolve the issue by talks, not by lathi charge. It is condemnable. Action should be taken against the guilty,” Akhilesh tweeted. Rahul Gandhi called it as BJP’s version of “Beti Bachao, Beti Padhao”.

Delhi University students led by the Congress student wing, NSUI, on Monday held protests in the capital to condemn police action against some female students who were demonstrating against alleged molestation on the Banaras Hindu University (BHU) campus in Varanasi. According to TOI reporters, members of All India Democratic Women Association were stopped by the police while protesting in front of Singh Dwar of BHU.

In wake of the violence that erupted in BHU and the condemnation it attracted from across the entire country, the following reactionary measures are taken by the concerned authorities –

The BIG QUESTION is – are these measures enough to provide safety to women in our country as a whole?

BHU students have alleged they have to face eve-teasers on the campus regularly and the varsity administration was not taking any action to stop the miscreants. Unfortunately, FIR has been lodged against 1000 students for protesting outside BHU; but no FIR is lodged against eve-teasers.

Also Read: Advice To Investors: It Pays To Invest In Female Led Companies

On one side, Indians celebrate Navaratris (ongoing till September 29) that are synonymous to respecting females considering them the epitome of Goddess Durga; and on the other side, Indians abuse, torture, molest, rape, and kill women as and when they seek an opportunity.

On one side, ‘Daughter’s Day’ is celebrated across the country with great pomp and show; on the other side, the daughters of the country are misbehaved with and badly treated.

Why do we and how can we condemn practices like female foeticide, when we cannot provide security to females?

The anguish inside me says that it is better to kill them before they are born instead of bruising and torturing them like this. It’s time to throw HYPOCRISY… and bring a change in the mindset of the society towards WOMEN!