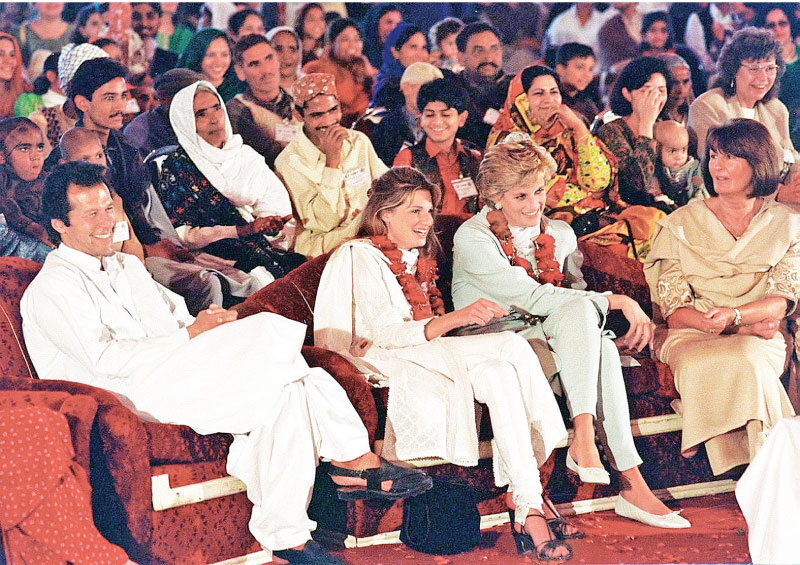 The game became more colorful with the advent of One Day cricket and players too became more playboyish in nature. Obviously everyone would love to know the dark, behind the scenes, secrets of the biggest playboys of cricket.

The current Pakistan Prime Minister for all his cricketing talent and philanthropic deeds is the biggest playboy in the game. Girls across the world used to develop cold feet and he too enjoyed all the limelight. Entire world got shocked when he married Jemima Goldsmith. The British beauty was 22 years younger to him. Some say Jemima forced Imran to marry her after she got pregnant.

Imran’s affair with Zeenath Aman too did rounds in the 80s. During those days his team mates used to tease him for his weary practice matches for spending whole night with Zeenath.

Imran Khan is also said to be Princess Diana’s go-between when the latter was said to be  “madly in love” with Hasnat Khan, a heart surgeon and cousin of Imran Khan, that she “wanted to marry him, even if it meant living in Pakistan.” This was revealed by no other than Jemima Khan herself.

Diana’s romance bloomed with the heart surgeon, whom she dated from 1995 until 1997, just 3 months before being killed in the car crash. Princess Diana would often visit him during her fundraising trips to Lahore for Imran Khan’s Cancer Hospital.

During one of the interviews Imran Khan suggested that Diana’s relationship with Dodi Fayed was a summer romance, possibly a calculated tactic to make Dr Khan jealous and persuade him to marry her

Imran went on to marry Reham Khan but they got divorced within 9 months. Presently Imran is married to his third wife, who is said to have been an spiritual partner to him.

Viv Richards used to be a terror for many bowlers on field and he had the reputation of a womaniser off the field. His name was linked to many beautiful girls before he married Miriam Richards.

His affair with Neena Gupta, kept secret for decades, surprised all. Both even had a child, who is none other than fashion designer Masaba Gupta.

Rawalpindi Express from Pakistan got the image of a spoilt brat. However many say his womaniser image was found to be false.

Shoiab surprised all by marrying 20 year old Rubab Khan. Earlier rumours spread that he would marry a 17 year old girl.

Azharuddin shot to fame with hattrick of centuries but after getting fame his affair with Sangeeta Bizlani hogged the media limelight. Sangeeta happened to be Salman’s ex girl friend. But married in 1996 after Azhar divorced his first wife.

However Sangeetha and Azhar divorced after his affair with Jwala Gutta did rounds.

As per last reports Azharuddin is believed to have married a third time again. His third wife being Shannon Marie Talwar.

Chris Gayle is known for his slam bang approach on and off the field. Many times he found himself on the wrong side of the law trying to woo even hot anchors. Many alleged that he even exposed his genitals to them.

Kohli’s name was linked to Sanjana and his aggressive nature made many link him to many stunning beauties from Tamannaah to Sarah Jane Dias and even Brazilian model Izabelle Leite Munch. However he ended all those rumours by marrying Anushka Sharma.

Shane Warne playboy nature bamboozled all just like the spinner bamboozles the batsman. Nurse Donna Wright alleged that he harassed her for sex. Another South African alleged that Warne sent her dirty texts. He went on to date Elizabeth Hurley but she broke alleging that he was an infidel.

Yuvraj Singh became the playboy of Indian cricket and his affair with Kim Sharma spread like a wild fire. Both parted ways in 2007 and Yuvraj went on record that Kim was extremely obsessive. Others however say Yuvraj’s mom didnot like Kim’s exposure on silver screen.

Yuvraj’s affair with Deepika Padukone too went viral after they were spotted enjoying many times. Reports have it that Yuvraj and Dhoni had rift as Dhoni too developed a liking for Deepika.

Yuvraj was often spotted with Anchal Kumar and also was seen with Priety Zinta. Yuvraj finally married Hzel Keech to shed off his womaniser image.