Home India The TINA Factor And General Elections In India – 2019 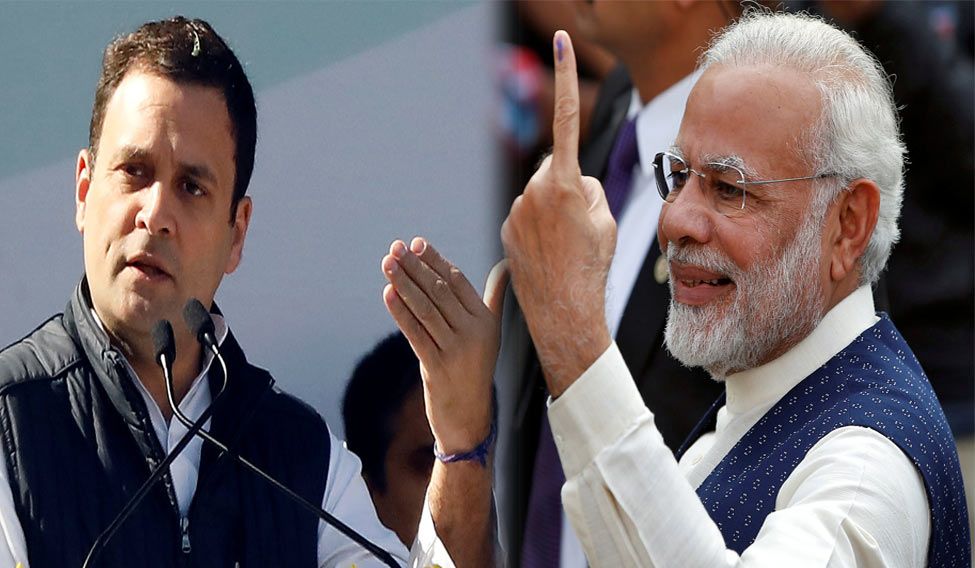 As we enter 2018, the political players and parties have begun positioning and preparing themselves for the general elections in 2019. Though the ruling alliance, the NDA, comprises of constituents who are ideologically similar and who contested the last election as a single unit, rumblings can be heard in its ranks.

The eternal agitator, Shiv Sena, has recently announced that it will go all alone the next year and very recently, the TDP supremo, Chandrababu Naidu, asked the central leadership of the BJP to rein its local leaders and fall in line or it too was ready to part ways.

The parties comprising the NDA have been together for years except for a minor blimp in 2014 when JD (U) walked out just before the elections on the issue of Mr. Modi being declared the BJP’s prime ministerial candidate.

These are early days but the real crisis lies within the opposition ranks. These parties could not foresee the latent anger in the Indian voter and contested the elections all alone which resulted in their near complete annihilation. The regional parties too were swept away by the Modi tsunami.

Today in India, there seems to be no leader worth the name who can even come close to the towering personality that Mr. Modi has become, let alone standing face to face with him. The polity of country seems to have become unipolar and it looks pretty unlikely that anyone will emerge to challenge and stop him from getting a second five-year term.

This is in complete contrast to the days in 1990s when the Congress party begin to decline politically and BJP was not the behemoth that it has become today. Those were the days when immoral and opportunistic alliances, taking leave of their ideologies, came together to form numerous ‘fronts’ to garner power all on the basis of their numbers in the parliament. Those were the days of fractured verdicts, hung parliament and mid-term elections and worthies who could not win an election on their own came to grace the prime minister’s chair. Truly dark days indeed!!!

Also Read: Intolerance In India – A Myth Or Reality (An Opinion)

It was in those days that the term TINA came to be bandied about in the Indian context. But what on earth is TINA? The term TINA (There Is No Alternative) is a slogan which was often used by the British Prime Minister Margaret Thatcher to claim that the market economy is the only system that works, and that debate about this is over. The basic moral argument underlying it is the moral principle that for human behaviour to be moral requires free-choice by people. Indian voters in those days, in the immediate aftermath of Ram Janambhoomi, were polarized on caste and communal lines and could not see beyond their narrow parochial outlook and this resulted in the country becoming the laughing stock of the world community. But today, the situation is entirely different as the world listens to and respects what India has to say as it is led by a strong and decisive leadership.

Cut to 2014 when in a victory speech in Vadodra on May 16, within hours of a famous and historic general election win, Narendra Modi thundered, “We will change the face of India in ten years.” To his critics, this was typical Modi bombast whence a leader who had just been elected for a five-year term was already talking of a decade in power. Nearly four years later, the Modi magic shows no signs of fading and it is looking increasingly likely that Modi has every chance of repeating his success in 2019.

In the last four years, BJP has formed the government in all the states that went to polls except for Delhi, Bihar and Punjab. The BJP also achieved a breakthrough win in Assam as well. But politicians and analysts tend to give disproportionate importance to state elections and there is an increasing disjunction between state and general elections. Though the BJP won all the seven seats in Delhi in the 2014 general elections , AAP swept to power barely eight months later on account of a Congress meltdown. The NDA dominated Bihar in the general elections but Mahagathbandhan won a two- thirds victory just eighteen months later.

The reason is that the chemistry in a state election is shaped by a strong local connect, and Arvind Kejriwal in Delhi and a Nitish Kumar in Bihar were the preferred chief ministerial choices in these two places. The same was true of Punjab and anyway, BJP was the junior partner here.

As of now, Mr. Modi is in a space of his own and in the general election race though, he is also the beneficiary of the TINA factor and so remains the front-runner. There is no evidence that Rahul Gandhi has the appetite to challenge him as a pan-Indian leader. In Gujarat, the Congress was unable to pull itself out of the morass it had sunk into and looked in utter shambles when Shankersinh Vaghela left the party and stepped down as opposition leader in the Gujarat Assembly as recently as July 2017. Despite this, it managed to put up a creditable show but it was more on account of smart alliances it put up with the trio of Hardik Patel, Alpesh Thakor and Jignesh Mevani. Besides, the farmers too were exercised about the slump in the minimum support prices of peanuts and cotton. But the BJP managed to retain Gujarat with prime minister’s personal popularity trumping the tide.

Regional satraps have their limitations too. Nitish Kumar has returned to the NDA and the significance of his embrace of the BJP cannot be overstated. It was a pragmatic choice as the ‘jungle raj’ narrative in Bihar was on the verge of revival and corruption scandal had reached the deputy chief minister’s doors. He has expressed “no confidence” not only in Lalu, but also in Rahul Gandhi. Lalu’s power in Bihar was a threat to him; and he has given up on Rahul’s ability to be a more effective national leader.

Arvind Kejriwal too had ambitions beyond Delhi as he ventured into Punjab, Goa and Gujarat electoral battlefields but burnt his fingers badly. As of now, his party seems to be in utter chaos and his claim of providing alternate politics is in tatters. Besides, his own credibility is in shambles in the wake of selection of Rajya Sabha candidates from the party.

Down south, In Tamil Nadu, the Dravidian parties seem to have relevance and the political focus seems to be shifting towards Rajanikanth who has announced his entry into politics. But this only will bolster the NDA as Rajanikanth is apparently very close to Prime Minister Modi.

In Bengal, Mamta Banerjee too, likes to see herself as a ‘national’ leader and does not leave any opportunity in letting her intentions known. I distinctly remember how she, during her post-victory press conference, took questions from the national media in Hindi and English first before turning to the Bengali channels. But the fact remains that her magic works in Bengal but has its geographical limits if attempted beyond the state. For an example, one may recall her ‘failed’ rally with Anna Hazare in Delhi just before the 2014 general elections.

The only hope for opposition to provide an alternative to Modi is to attempt a United Front-like experiment of the mid-1990s. But this is easier said than done as the internal contradictions amongst state leaders make it impossible for them to be seen on a single platform in the near future as well. As Nitish was widely expected to be a leading figure in a potential grand alliance of non-BJP parties to contest Modi in 2019, his departure has a major signaling effect.

More politicians are likely to give up on Rahul Gandhi and switch sides. How draining the effect is would depend on how quickly the key non-BJP parties come together and show political resolve. Even the Congress, whose social base has been taken over by these regional forces, will find it difficult to completely surrender and accept a B team status across India. Moreover, the country itself will not easily accept a ragtag coalition as a ‘stable’ option to a Modi government.

Besides, the opposition cannot easily project defence of secularism as their key idea, for if secularists are tainted with believable charges of corruption, the project of secularism alone will not take the stain of corruption away. The BJP might not be incorruptible but in the court of public opinion, the narrative of secular corruption has stuck. In the short run, this problem can be overcome only if the opposition can credibly demonstrate that the BJP, too, is corrupt. And the people have to believe that assertion.

But the changing demographics of India should comfort the Modi camp as Modi symbolises the urban middle class yearning for a ‘strong’ India, an aspirational and meritocratic society that is driven by a desire for speedier growth and less big ticket corruption. As the country becomes more urbanised, the Modi model of governance has found a well-defined constituency in the ‘neo-middle class’ who are convinced that India’s time has come. For this large social group, especially amongst younger Indians, Modi remains an iconic figure of hope.

It is a well-known fact that ideology has ceased to matter in Indian politics and a full-blown political marketplace has emerged. It has also been suggested by political analysts that the so-called millennials, those born in the decade of the 1990s, are less ideologically inclined and more interested in economic aspirations and India’s glory on the world stage. They are ushering in ideological erosion in Indian politics. Besides, the prime minister has also been strategic and has pushed aspirational ideas like ‘Make in India’ and ‘Start up India’ with pro-poor financial inclusion schemes like Jan Dhan Yojana and Mudra Bank.

Though Rahul Gandhi has become the butt of jokes of both the Modi Bhakts and the general public alike, it is not his fault. The fault squarely lies with his advisers and the script writers, and poor Gandhi scion jumps from one fiasco to another. Even the politicians do not take him seriously and openly deride him, as one senior politician quipped that the BJP and Congress would have the same slogan in 2019, “Rahul Gandhi for prime minister’. Mamta Bannerjee too seconded this feeling when she said that “Rahul is Modi’s biggest USP”. So, the opposition’s preparedness till now points towards a leadership vacuum in the anti-Modi opposition.