Here, at last, the profound, moving and devastating riposte to Donald Trump that many in America, and the world, had been waiting for. And the antidote to the non-politician came from another non-politician – a mother.

Michelle Obama, the first black first lady in American history, gave a 15-minute address to the Democratic national convention that drew cheers, left some delegates openly weeping and did more than any governor or congressman to unite and fire up the party for November’s presidential election.

It also added a chapter to the dynastic saga of the Obamas and the Clintons, coming four years after Bill Clinton gave an extraordinary speech to help Barack Obama get re-elected.

The former president was in the audience on Monday – caught on camera mouthing the word “wow” as Michelle Obama delivered one of the most passionate speeches of election year. On Twitter, President Obama wrote: “Incredible speech by an incredible woman.”

She made reference to a speech made by Hillary Clinton when she conceded defeat to Barack Obama in 2008, saying: “We weren’t able to shatter that highest, hardest glass ceiling this time” after a bruising primary campaign. 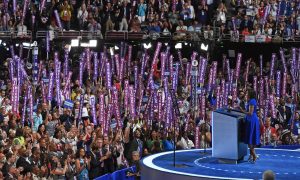 Clinton “has the grace and the guts to keep coming back and put cracks in that highest and hardest glass ceiling until she finally breaks through, lifting all of us with her”, the first lady told a packed arena in Philadelphia. “That is the story of this country. The story that has brought me to this stage tonight.”

The election of the first African American president, and now potentially the first female president, were testament to the true America and a repudiation of all Trump stands for, she continued.

“The story of generations of people who have felt the lash of bondage, the shame of servitude, the sting of segregation but who kept on striving and doing what needed to be done so that today I wake up every morning in a house that was built by slaves and I watch my daughters, two beautiful, intelligent black young women, playing with their dogs on the White House lawn.”

Michelle Obama’s voice cracking with emotion, she continued: “And because of Hillary Clinton, my daughters, and all our sons and daughters, now take for granted that a woman can be president of the United States.”

Veteran civil rights activists John Lewis and Jesse Jackson were present. Some delegates could be seen wiping away tears. “So don’t let anyone ever tell you this country isn’t great, that somehow we need to make it great again because this right now is the greatest country on earth,” she said.

The elegant inversion of Trump’s campaign slogan prompted the crowd to erupt in cheers and wave regal purple placards bearing the name “Michelle”.

After a rocky start to the convention, with supporters of Bernie Sanders rebelling over leaked emails, Obama urged Democrats to get to work and recapture the spirit of the past two elections when she was such a force for her husband. “So in this election we cannot sit back and hope that everything works out for the best. We cannot afford to be tired or frustrated or cynical. No, hear me: between now and November, we need to do what we did eight years ago and four years ago.” 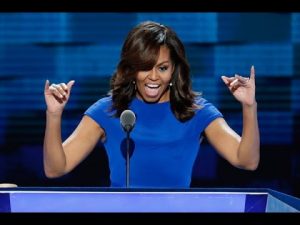 She permitted herself just a little wistful looking back in a speech that focused on how a president, like a parent, should set an example to children. She told how during their time at the White House she and Barack saw their daughters “grow from bubbly little girls into poised young women”.

Recalling their first day at school, she said: “I will never forget that winter morning as we watched our girls, just seven and 10 years old, pile into those black SUVs with all those big men with guns. And I saw their little faces pressed up against the window and the only thing I could think was: what have we done?

“Because at that moment I realised that our time in the White House would form the foundation of who they would become and how well we managed this experience could truly make or break them. That is what Barack and I think about every day as we try to guide and protect our girls for the challenges of this unusual life in the spotlight.

“How we urge them to ignore those who question their father’s citizenship or faith. How we insist that the hateful language they hear from public figures on TV does not represent the true spirit of this country. How we explain that when someone is cruel or acts like a bully, you don’t stoop to their level. No, our motto is: ‘When they go low, we go high.’”

Michelle Obama spoke of the young black boy who looked up at the president and asked: “Is my hair like yours?” She said: “And make no mistake about it, this November when we go to the polls, that is what we’re deciding. Not Democrat or Republican, not left or right, no – this election and every election is about who will have the power to shape our children for the next four or eight years of their lives.”

The one person she trusts, she said, is Hillary Clinton. “What I admire most about Hillary is that she never buckles under pressure. She never takes the easy way out. And Hillary Clinton has never quit on anything in her life. And when I think about the kind of president I want for my girls and all our children, that’s what I want.

“I want someone with the proven strength to perserve. Someone who knows this job and takes it seriously. Someone who understands that the issues a president faces are not black and white and cannot be boiled down to 140 characters.”

That dig at Trump’s tweeting produced another roar from the crowd. “Because when you have the nuclear codes at your fingertips and the military in your command, you can’t make snap decisions. You can’t have a thin skin or tendency to lash out. You need to be steady and measured and well informed.”