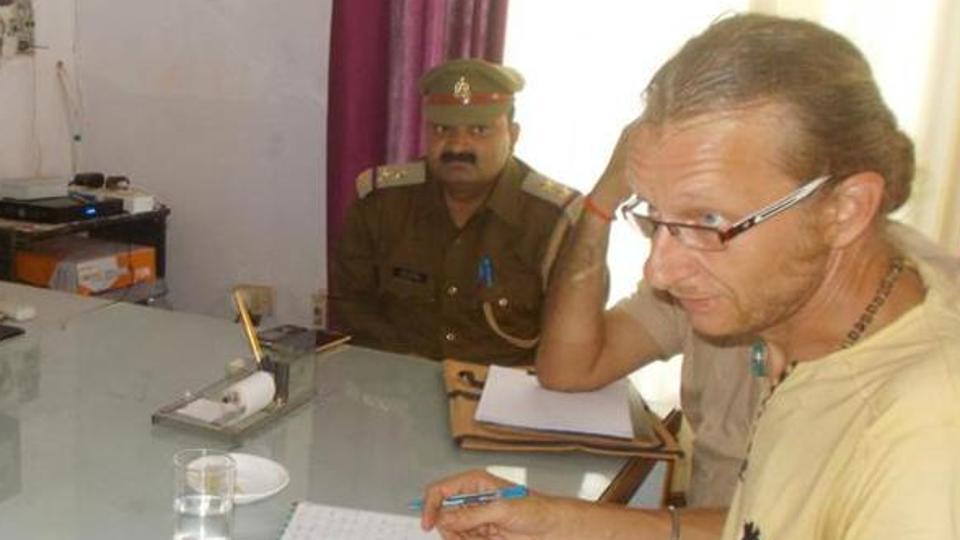 With India reeling under bad publicity over incidents of violence against Tourists and Foreign Nationals, the incident of a German Tourist allegedly being assaulted by a Railway employee in Uttar Pradesh and a Nigerian’s body being fished out of a drain in Delhi add to the unfortunate statistics.

As per reports, a German tourist and a railway employee entered into an altercation at the Robertsganj railway station in Sonbhadra district of Uttar Pradesh, after which both filed complaints against each other, police said.

The railway employee alleged that he had greeted Holger Erik Misch by saying “Welcome to India”, when the German hit him.

Holger Erik Misch, a resident of Berlin, had also allegedly attacked two policemen with a stick.

“The German national has been arrested. First of all he did not have a tourist visa and secondly he was carrying a forged visa,” superintendent of Police, Sonbhadra, RP Singh told PTI over phone.

The incident comes days after a Swiss couple were attacked near the railway station at Agra’s Fatehpur Sikri.

On the other hand, a 45-year-old Nigerian national died after allegedly falling in a drain in south Delhi’s Saket, the police said today. The incident was reported to the police yesterday.

An African national was pulled out of a drain near Saket Metro Station, the police said.
He was later identified as Fakos Sunny Ligali, a Nigerian national, they said.

The German tourist Holger Erik Misch has an FIR registered against him in Kullu in Himachal Pradesh, senior officials said. Misch also is being investigated for Travel documents fraud and is likely to be arrested soon.

Misch and railway supervisor Aman Kumar entered into an altercation and fought with each other yesterday at around 1 pm at platform number one of the Robertsganj railway station, a senior police official said in Lucknow.

“According to reports, the railway supervisor enquired the German tourist about his well being, which angered him.

The German hit the railway employee, who might have pushed him in retaliation. Based on the complaints of the two, non- cognisable reports have been registered. Their medical examination has been conducted,” ADG (Law and Order) Anand Kumar told reporters in Lucknow.

Police officials said that it had also emerged that an FIR was lodged against the German tourist on July 5 in Kullu, Himachal Pradesh, on charges of attacking a person with a sharp edged weapon.

His passport and visa is deposited in the chief judicial magistrate court, they said.

Kumar claimed that when he greeted Misch by saying “welcome to India”, the German hit him. Misch refused to talk to the media.

Earlier, on October 22, two tourists from Switzerland, Quentin Jeremy Clerc (24) and Marie Droz (24), were chased and attacked with stones and sticks by a group of five youths in Fatehpur Sikri, triggering widespread outrage.

External Affairs Minister Sushma Swaraj had sought a report from the UP government on the attack. Union Minister of State for Tourism K J Alphons had dashed off a letter to Chief Minister Yogi Adityanath, saying the incident could have a negative impact on the image of the country.

The couple were offered a free stay in a 5-star hotel in the national capital as a “token of concern” by Alphons.

Even as the police probed and arrested the German tourist over forged documents and for assaulting policemen on duty with a stick, the opposition Samajwadi Party (SP) attacked the BJP government over what it called the “growing attacks” on foreign tourists in the state.

“Earlier in Agra and now in Sonbhadara. The situation is the same everywhere. It’s a big achievement on the tourism front that the pride and lives of foreign tourists are in danger. This is Yogi (Adityanath) government,” SP spokesman Sunil Singh Sajan said.

BJP spokesman Shalabh Mani Tripathi said that the incident was unnecessarily “hyped” by the opposition.

“It was a fight between two individuals and police was prompt to intervene. The German national had a case lodged against him. A probe is on in the matter. If any one is guilty, he will be taken care of by the police,” Tripathi said.