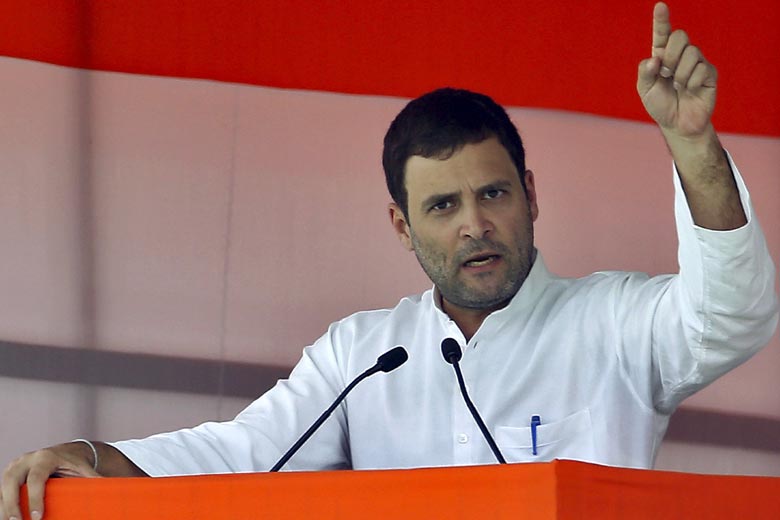 Soon after taking up the Congress baton today, Rahul Gandhi hit out at the BJP, accusing it of spreading hatred and violence in the country, and alleged that Prime Minister Narendra Modi was taking India back to the medieval times.

In his first speech to party workers after formally assuming charge as the Congress president, he set the tone for the future course and how the party would take on its arch- rival BJP — “The Congress’s respect for all Indians extends to even the BJP. We do not fight hate with hate. They crush voice, we allow the most vulnerable to sing. They defame, we respect and defend.”

Displaying humility, Gandhi said he took over the party reins knowing that he would always be walking in the “shadow of giants”.

Gandhi also told partymen that they were his “family” and he would stand and protect all those workers fighting for the oppressed and those on the fringes. He also assured them that their voice would be heard in a new setup under him.

“Today, the BJP people are trying to spread fire and violence in the entire country and only the force of lovable Congress workers and leaders can stop them.

“They break, we unite. They ignite fire, we douse it.

They get angry, we love. This is the difference between them and us,” he said.

Attacking Modi, he said the Congress took India into the 21st century, “while the prime minister today is taking us backward, to a medieval past where people are butchered because of who they are, beaten for what they believe and killed for what they eat”.

This ugly violence in the country, he says, has “shamed us” in the world as India’s philosophy and history, born out of love and compassion, are being tarnished by such horror.

“No amount of hugs can repair the damage done to this great country of ours,” he said.

Hitting out at Modi, Gandhi said that the prime minister believed that his was the voice of reason whereas even expertise, experience and knowledge could be cast aside for personal glory.

“That it is acceptable for our foreign policy to lie in tatters so that one man can feel strong, and that everything in fact is subservient to the leader’s personal image,” he said.

Asking the Congress workers to connect with people of the country, Gandhi said, “I want the Congress party to become an instrument for dialogue between Indian people all of us, from all corners of our great country, all religions, all ethnicities, all ages, genders and people and for our dialogue to always be led by love and affection.”

He assured Congress workers and leaders that they were his family, irrespective of whether they were young or elderly and from wherever they belong. “You all are mine,” he told them.

He exhorted the youth to transform India’s ‘Grand Old Party’ into a ‘Grand Old and Young Party’, and invited them to join it.

“We will work together to create an India of love and brotherhood. We will fight the politics of anger and defeat them,” he said.

Taking on the BJP, the Congress president said, “They (the BJP) want an India free of Congress, they want to erase us but the Congress’s inclusion and respect for all Indians extends to even the BJP. We do not fight hate with hate.”

“They crush voice, we allow the most vulnerable to sing.

They defame, we respect and defend. They might control the structures of power, the machinery of silence and fear, but we in the Congress, we are the bastion of the people,” he said, adding that it is in this service that his idealism and hope for politics always rest.

In India, he says, two ideas have historically clashed – the “idea of the self versus the idea of the other”.

Describing the Congress as an ancient idea, he targeted BJP leaders alleging that they “are soldiers fighting for the self and for how much they can have and how they can protect their power, while stopping others”.

“We fight for everyone…we fight for those who cannot fight alone and our struggle has always been one of brotherhood and of love…we will never allow the democratic dreams and longings of our people, not one of them, to ever be silenced,” he said.

“They can only defeat us if we back down. Stand up to them – and their anger and hatred makes all of you and us stronger,” said Gandhi, after taking charge as the Congress president from his mother Sonia Gandhi, who remained at the helm for a record 19 years.