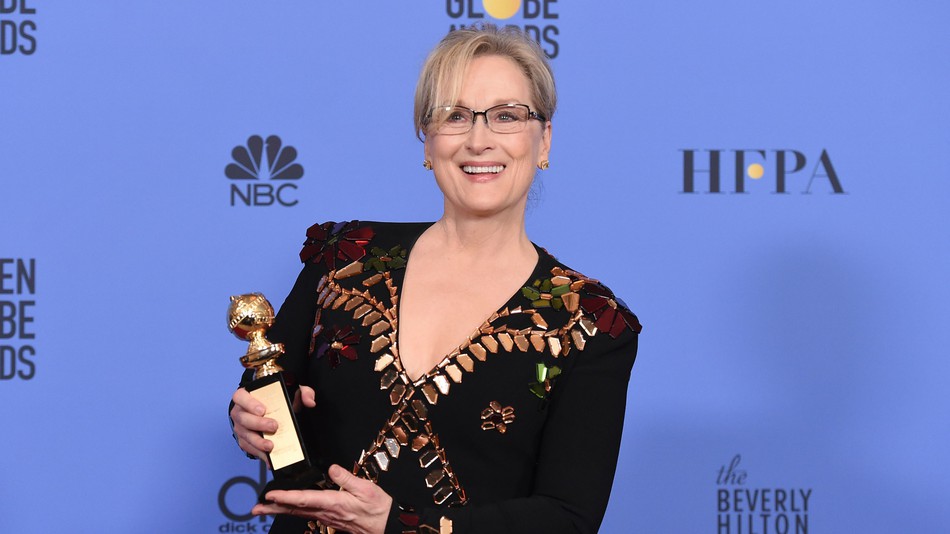 Actress Meryl Streep turned a Golden Globe acceptance speech into a scathing attack on U.S. President-elect Donald Trump, saying she had been heartbroken by his imitation of a disabled reporter during his campaign.

“There was one performance this year that stunned me,” Streep, 67, said as she was honored with the Cecil B. DeMille lifetime achievement award Sunday night.

“It sank its hooks in my heart. Not because it was good. It was that moment when the person asking to sit in the most respected seat in our country imitated a disabled reporter.”

The three-time Oscar winner was referring to a 2015 incident at a South Carolina rally when Trump flailed his arms and slurred in his speech in an apparent mocking of New York Times reporter Serge Kovaleski, who has a physical disability. Trump later denied that he was imitating the reporter. “It kind of broke my heart when I saw it and I still can’t get it out of my head because it wasn’t in a movie. It was real life,” Streep said.

While Meryl Streep’s speech was broadcasted around the world, a storm ensued across the Indian twitterati. None without exception appreciated her, but sarcasm flowed unhindered for different reasons. Everyone started comparing her courage as an artist to take on the President Elect with Indian Bollywood star Amir Khan who for similar reasons was hounded through an organized social media trolling. The criticism and hate was so severe that not only the actor but even the companies that sponsored him were targeted viciously and were forced to remove him from the brand ambassadorship despite legal boundations.

Below is the full text from Meryl Streep’s speech:

Please sit down. Thank you. I love you all. You’ll have to forgive me. I’ve lost my voice in screaming and lamentation this weekend. And I have lost my mind sometime earlier this year, so I have to read.

Thank you, Hollywood Foreign Press. Just to pick up on what Hugh Laurie said: You and all of us in this room really belong to the most vilified segments in American society right now. Think about it: Hollywood, foreigners and the press.

But who are we, and what is Hollywood anyway? It’s just a bunch of people from other places. I was born and raised and educated in the public schools of New Jersey. Viola was born in a sharecropper’s cabin in South Carolina, came up in Central Falls, Rhode Island; Sarah Paulson was born in Florida, raised by a single mom in Brooklyn. Sarah Jessica Parker was one of seven or eight kids in Ohio. Amy Adams was born in Vicenza, Italy. And Natalie Portman was born in Jerusalem. Where are their birth certificates? And the beautiful Ruth Negga was born in Addis Ababa, Ethiopia, raised in London — no, in Ireland I do believe, and she’s here nominated for playing a girl in small-town Virginia.

Ryan Gosling, like all of the nicest people, is Canadian, and Dev Patel was born in Kenya, raised in London, and is here playing an Indian raised in Tasmania. So Hollywood is crawling with outsiders and foreigners. And if we kick them all out you’ll have nothing to watch but football and mixed martial arts, which are not the arts.

They gave me three seconds to say this, so: An actor’s only job is to enter the lives of people who are different from us, and let you feel what that feels like. And there were many, many, many powerful performances this year that did exactly that. Breathtaking, compassionate work.

But there was one performance this year that stunned me. It sank its hooks in my heart. Not because it was good; there was nothing good about it. But it was effective and it did its job. It made its intended audience laugh, and show their teeth. It was that moment when the person asking to sit in the most respected seat in our country imitated a disabled reporter. Someone he outranked in privilege, power and the capacity to fight back. It kind of broke my heart when I saw it, and I still can’t get it out of my head, because it wasn’t in a movie. It was real life. And this instinct to humiliate, when it’s modeled by someone in the public platform, by someone powerful, it filters down into everybody’s life, because it kinda gives permission for other people to do the same thing. Disrespect invites disrespect, violence incites violence. And when the powerful use their position to bully others we all lose. O.K., go on with it.

O.K., this brings me to the press. We need the principled press to hold power to account, to call him on the carpet for every outrage. That’s why our founders enshrined the press and its freedoms in the Constitution. So I only ask the famously well-heeled Hollywood Foreign Press and all of us in our community to join me in supporting the Committee to Protect Journalists, because we’re gonna need them going forward, and they’ll need us to safeguard the truth.

One more thing: Once, when I was standing around on the set one day, whining about something — you know we were gonna work through supper or the long hours or whatever, Tommy Lee Jones said to me, “Isn’t it such a privilege, Meryl, just to be an actor?” Yeah, it is, and we have to remind each other of the privilege and the responsibility of the act of empathy. We should all be proud of the work Hollywood honors here tonight.

As my friend, the dear departed Princess Leia, said to me once, take your broken heart, make it into art.

And here is Ms. Davis’s introduction for Ms. Streep:

She stares. That’s the first thing you notice about her. She tilts her head back with that sly suspicious smile, and she stares for a long time. And you think: Do I have something in my teeth? Or does she wanna kick my [expletive] — which is not gonna happen?

And then she’ll ask questions. “What’d you do last night, Viola?”

“Oh I cooked an apple pie.”

“Did you use Pippin apples?”

“Oh. Did you make your own crust?”

“No, I used store-bought crust. That’s what I did.”

“Then you didn’t make an apple pie, Viola.”

Silence. I shut her down.

“Well, they don’t taste right unless you use ham hocks. If you don’t use ham hocks it doesn’t taste the same. So how’s the family?”

And as she continues to stare you realize that she sees you. And like a high-powered scanning machine she’s recording you. She is an observer and a thief. She waits to share what she has stolen on that sacred place, which is the screen. She makes the most heroic characters vulnerable, the most known familiar, the most despised relatable. Dame Streep. Her artistry reminds us of the impact of what it means to be an artist, which is to make us feel less alone. I can only imagine where you go, Meryl, when you disappear into a character. I imagine that you’re in them, patiently waiting, using yourself as a conduit, encouraging them, coaxing them to release all their mess, expose, to live. You are a muse. Your impact encouraged me to stay in the line.

Dame Streep, I see you. I see you. And you know all those rainy days we spent on the set of “Doubt”? Every day my husband would call me at night and say, “Did you tell her how much she means to you?”

And I said, “No, I can’t say anything, Julius, I’m just nervous. All I do is stare at her all the time.”

He said, “Well, you need to say something. You’ve been waiting all your life to work with this woman. Say something.”

“O.K. you better do it tomorrow because when I get there I’m going to say something!”

I haven’t said anything. But I’m gonna say it now. You make me proud to be an artist. You make me feel that what I have in me, my body, my face, my age, is enough. You encapsulate that great Émile Zola quote that if you ask me as an artist what I came into this world to do, I, an artist, would say, I came to live out loud.