Home Lifestyle Celebrities What Made An Act Of Duty By a Cop, To Be Hailed... 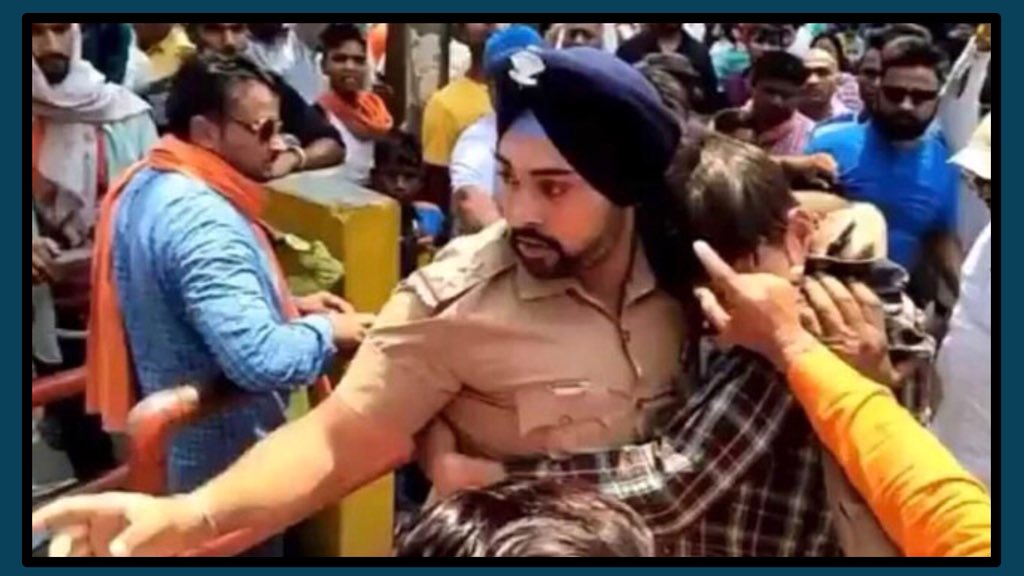 The video of a brave policeman Gagandeep Singh saving a youth from a frenzied crowd in Uttarakhand has gone viral earning him accolades and the cop is hailed as a ‘Hero’ for his act .

The incident is seen as a ray of hope in such times when faith based attacks by the erstwhile fringe elements is becoming a norm. The Muslim youth in this case was attacked when he was visiting his Hindu girlfriend and if not for the brave cop he would have been badly beaten and in all likelihood, lynched by the mob.

The police officer Gagandeep Singh stood his ground and saved the man even after the mob started yelling, “Police Prashasan Murdabad”. Not the first time where Muslims have been targeted by Hindutva mobs on the pretext of possessing beef or love jihad, beaten mercilessly and at least three of them have been killed publicly.

Akhlaq, Junaid and Afrazul were all killed mercilessly while hordes of people stood watching and in some cases even cheering the killings. In almost all such cases, families of the victims were further targeted and harassed in an effort to send a militant message and create panic among the minorities.

Allegedly in most cases, parts of the media played partisan, twisted the plot, blamed the victims and brazenly indulged in whataboutery resulting in justifying the mob attacks in some way or the other instead of outright and unequivocal condemnations. In such a  scenario, a brave cop standing upto the goons and protecting the Muslim youth is no doubt commendable, but also to some extent worrying.

Worrying because, an act in normal course of duty by a police officer is suddenly seen here as an exceptional act of bravery. This forces us to realize the disturbing times we are living in currently, the irony of the situation being more than baffling.

In a tweet by a well know twitterati Aarti @aartic02, she shares the common public sentiment of the day, saying:

The worst came by when the cop was trolled and attacked for saving a life, for doing his duty. The unending whataboutery has successfully managed to hijack any issue, turn it into mockery of societal ethics, be it the mob lynchings or rape of an eight year old child. Incidents that should have evoked strong criticism have often ended up being turned into the classical Us vs Them jingoism, undermining the very nature of the gruesome acts.

Akhlaq was allegedly killed only on the suspicion of possessing beef (which later was found to be false), Afrazul on the pretext of love jihad which again, it is claimed, turned out to be a lie and Junaid as per his brother who accompanied him, was killed merely for being a Muslim. All these incidents occurred in broad day light in front of a crowd which stood watching the killings and not one tried to intervene and stop. Sixteen year old Junaid was killed in a train allegedly because of his faith and not one person in the entire train came forward to stop the goons.

This gives a fairly clear insight as to why an act of duty by the policeman is hailed and celebrated. He is seen as a saviour and a glimmer of hope in an environment of hatred, often fed by the frequent vitroils of many a public figures and their pernicious influences, all tailored for extracting political mileage. Unfortunately the hate mechanisms are so strong that we need many a Gagandeep Singhs to stand up for the rights of the oppressed, to do their duty without any fear and most importantly to take a stand in front of the hate mongers, without any fear.

If one Gagandeep Singh can stand up to the goons and stop them, a proactive crowd of conscientious people, taking a stand and speaking up for what is right and just in the society, would go a long way to reassure those on the receiving end of such bigotry.

Divided by hate and political ideologies, many are oblivious to the fear a section of our society is living in. The daily demeaning of the minorities by a major section of the media has only added to the fear psychosis and their getting targeted brazenly. To top it all, any such violation of rights and harassment is easily being justified one way or the other. Thus devoid of any logic, a sense of frenzy gets created by the media. Social media also adds fuel to the fire as fake news and pics get widely shared through applications like WhatsApp and Messengers.

Thus in the prevalent times even routine acts of duty are much appreciated and duly hailed. To encourage people to stand up and shun violence, Gagandeep certainly needs to be acknowledged and celebrated until such time, such acts become the norm and do not remain only as an exception.

In the present circumstances what we badly need is not just one but many more brave Gagandeeps to fight this growing menace of communal forces out to destroy the secular fabric of India.

People like Gagandeep who exuberate courage of conviction, can take a stand and thus act as inspiration for others to follow are the real jewels of the society. More power to the hero, Gagandeep.

“Courage is contagious. When a brave man takes a stand, the spine of others is often stiffened “